We know where Bill Maher got the shirt that he wore to perform at George Washington University—’cause we made it. Lookin’ good, Bill. 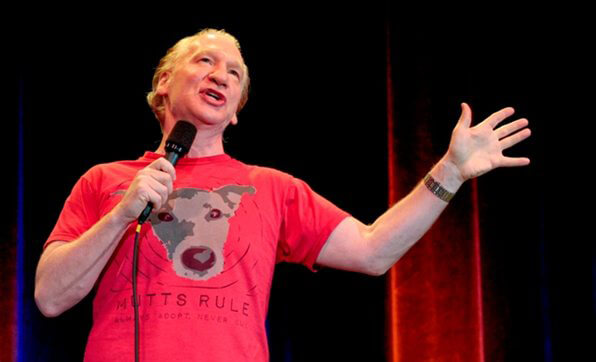 Speaking of making it: After becoming the first vegan to win a Food Network cooking competition, chef Chloe Coscarelli is still on a (vegan-buttered) roll, making the world a better place for animals and our waistlines. Check out her scrumptious new recipes on Eatocracy.

Anna Wintour took some heat for being cold-hearted enough to wear several cold-blooded animals on her back. “She looks like she got that at a consignment store where pimps drop their coats off,” said E! news anchor Giuliana Rancic.

Another proud animal friend who’s “still right here” is Melissa Ferrick, who is currently on tour promoting her new album. The adoption advocate would love what Robert Downey Jr. and his wife, Susan, are up to—the couple adopted a pair of cats their friend found in a bush.

Cats don’t belong in the wild, but elephants certainly do, according to Coldplay, whose new video features the band members dressed up as elephants searching for “Paradise.”