For years, singer-songwriter Melissa Ferrick has worn her emotions on her sleeve, and used her music to draw attention to issues that are important to her. Well, now she’s speaking up for the millions of homeless animals killed in shelters each year in this stunning new ad promoting responsible animal guardianship. The shot may look familiar to die-hard Ferrick fans; she donated the cover of her 2006 release, In the Eyes of Strangers, for us to use in the ad. 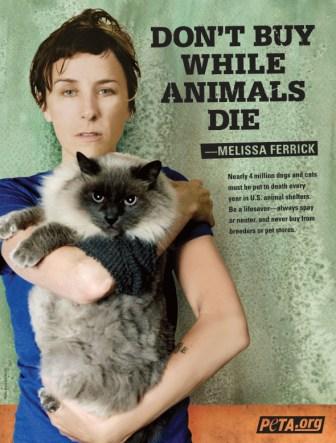 Speaking out on important issues is nothing new for Ferrick, who is openly gay and talks about it in her songs. She burst onto the national scene after she was booked to open for longtime PETA pal Morrissey in the early ’90s, and later started her own label, Right On Records. Ferrick is currently gearing up for a fall tour with alt-folk icon Ani DiFranco.