When Ringling invited a camera crew to its “Center for Elephant Conservation” (CEC) in a bid to convince people that the animals aren’t abused, the plan backfired.

Ringling’s PR folks don’t admit that the circus trains elephants by chaining them or tying them up with ropes and beating them with bullhooks or shocking them with electric prods (even though former Ringling trainers and photographs have confirmed the “training” routines). And obscuring those facts was the plan when a morning news crew went to the CEC, where Ringling breeds elephants and trains the babies to be the next generation of unwilling performers. But despite the circus’s best efforts to conceal the abuse, something on the tape caught PETA’s eye. 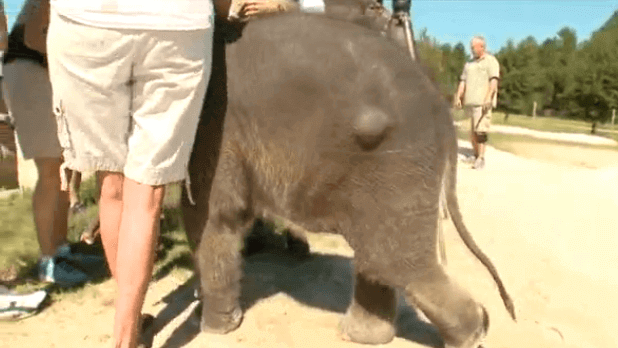 It appeared as though the youngest baby elephant, 3-month-old Mike, had an abscess near his left hip. We contacted an independent veterinarian who has more than 40 years of experience working with exotic animals, including elephants. The vet identified the abscess as most likely a “hook boil”—caused by Ringling’s favorite fireplace-poker–like “training tool,” the bullhook.

We promptly took the evidence to the Polk County, Florida, sheriff’s office animal control unit, which is responsible for the area in which the CEC is located, and asked it to investigate Mike’s wound. If it finds evidence of abuse, we’ve asked it to prosecute under the Florida law that states that “[a] person who intentionally commits an act to any animal … which results in the … excessive or repeated infliction of unnecessary pain or suffering, or causes the same to be done, commits aggravated animal cruelty.”

The sheriff’s department is authorized to seize an animal who is found to be abused, and PETA will push for authorities to take action to the fullest extent of the law.

Please take a minute of your time to weigh in regarding these suffering elephants and push for them to get the retirement that they deserve.