PETA has named CareerBuilder the 2012 “Ass-Backwards” Corporation of the Year. The job-search company earned this (dis)honor for proving that it’s obliviously behind the times, having decided to run yet another Super Bowl ad that features exploited infant chimpanzees—even though it knows how great apes suffer at the hands of the “entertainment” industry. 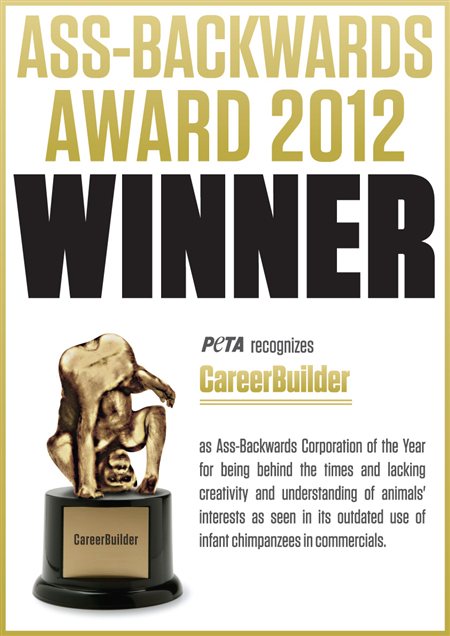 Get With the Program

Nine of the top 10 ad agencies in the U.S. have already committed never to use great apes in their ads, as have many major corporations, including CareerBuilder’s main competitor, Monster. Yet CareerBuilder proves that it’s creatively and ethically bankrupt by continuing to rely on the same cruel and played-out tactic year after year.

Apes Suffer for Our Amusement

Chimpanzees used in the entertainment industry are torn away from their mothers, beaten and brutally trained behind the scenes to make them compliant on the set, and discarded—usually at unaccredited roadside zoos (or otherwise warehoused in appalling conditions)—when they become too strong to be handled safely.

CareerBuilder executives know all this—because PETA and its supporters have told them so repeatedly—and they also know that computer-generated imagery would allow them to create the same ads without causing animals to suffer. Yet they continue to run these irresponsible ads again and again.

Because of CareerBuilder’s willingness to ignore animals’ suffering and the well-founded concerns of a large percentage of its potential audience, PETA has bestowed upon the company the distinction of being 2012’s “Ass-Backwards” Corporation of the Year!