Feces littered the floor and black mold covered the walls of a house that held 34 cats—many of them hungry, thirsty, and sick. Some animals were hunched over in tiny cages, covered with their own excrement. Even the beds of the humans who lived there had feces on them. Dogs and chickens were found outdoors without any food.

Sounds like something you might see on Confessions: Animal Hoarding, right? Surprisingly (or perhaps not so surprisingly) this hellhole—raided a few days before Christmas by Harrison County, Indiana, animal control—billed itself as a no-kill animal shelter called “Frisky Felines Foundation.”

Multiple similar cases have made headlines in just the past few months. In September, the SPCA of Upstate New York seized 68 animals from Peaceable Kingdom Animal Rescue, a no-kill facility. The animals were emaciated, dehydrated, and suffering from mange, eye infections, dental problems, diarrhea, and other health issues that appeared to have gone untreated.

PETA’s investigation of Angel’s Gate, Inc., a self-proclaimed animal “hospice and rehabilitation center” in Delhi, New York, revealed that paralyzed animals dragged themselves until they developed bleeding sores, animals were denied veterinary care (one dog suffered with an infected, rotten, broken jaw), crowded conditions were so stressful that fights erupted daily, and animals were kept in urine-soaked diapers for days at a time, resulting in urine scald. Angel’s Gate promised unsuspecting people that “special needs animals” would “live out their days in peace, dignity and love.” Although its founder and operator, Susan Marino, now faces charges of cruelty to animals and criminal possession of a controlled substance, hundreds of animals remain in her hands—a situation that you can help change. 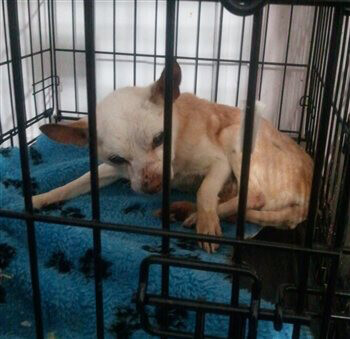 This elderly, weak Chihuahua—given to Marino by an animal
shelter—suffered terribly without veterinary treatment for about two
weeks before dying.

The line between hoarders and no-kill facilities has always been a blurry one. After all, many no-kill animal shelters’ modus operandi is to avoid euthanasia at all costs, even if it means caging animals for the rest of their miserable lives. But thankfully, awareness is growing about the many ways in which the no-kill philosophy promoted by Nathan Winograd and others fails animals. Writer Phyllis M. Daugherty explained the situation brilliantly in her recent Opposing Views column:

We all would love to see an end of the need to euthanize behaviorally and physically sound discarded pets, but there are just not enough homes to adopt them. Humane euthanasia to relieve shelter overcrowding cannot be stopped just because it is uncomfortable or unpopular without subjecting thousands of innocent animals to suffering in packed kennels plagued with disease and injury or death from attacks and fighting.

We must not allow them to be “rescued” by those who are unprepared for or unable to provide for all their needs. We also cannot, in the name of “No Kill” and in our rush to feel good about having them “leave the shelter,” release them into the hands of someone who can sadistically watch them suffer and/or starve to death, often with food available on the premises.

How You Can Keep Animals Safe From Hoarders

The abundance of homeless animals in nearly every community makes it easy for hoarders masquerading as rescue facilities and sanctuaries to acquire their victims. Spaying or neutering even one dog or cat can prevent thousands of additional animals from being born only to end up homeless, hoarded, or worse. It’s also crucial to support open-door animal shelters, which accept every animal in need and never keep animals stored away like surplus merchandise.