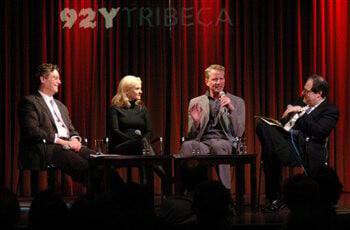 If the audience members came in with doubts or criticism, we’re betting that they left with insight into PETA’s tactics after hearing Dan explain that PETA has wonderful stories about building houses for “backyard dogs,” rescuing animals from cruel circuses and laboratories, and much more—but what news outlets like Inside Edition want to cover is controversy, nudity, and celebrities.

Although he was there to serve as an unbiased voice, Stuart Elliott noted that PETA’s ability to create “buzz” through naked ads and the use of celebrities in protests was decades ahead of modern social-media campaigns. He also commented that the success of PETA’s “shockvertising” has persuaded other organizations to follow suit. I guess imitation really is the sincerest form of flattery.