PETA has launched a limited-edition sheet of U.S. postage PhotoStampsTM featuring famous vegetarians throughout history. The VIPs featured on these unique postage sheets ditched meat from their diets either out of concern for their health, for the environment, or for animals—and our world would not be the same without their accomplishments. Although the individuals featured in this series seem very different at first glance, they are united in their respect for animals. 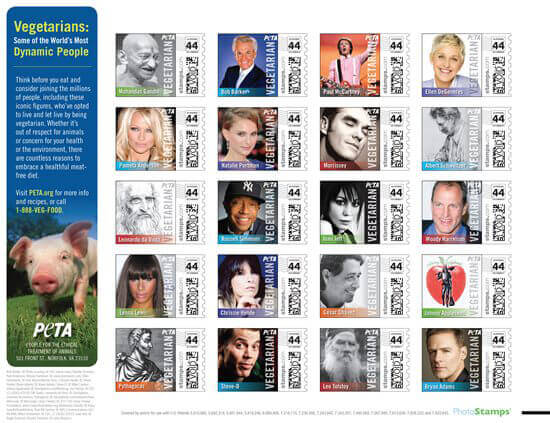 Pick up this limited edition collectible PhotoStampsTM sheet at PETACatalog.com for yourself, or grab some to give as gifts. This postage will be available for a short time only, so get yours before they sell out.

Why go vegetarian? Check out words of wisdom from some of the stars of PETA’s vegetarian postage series:

Ellen DeGeneres: “I personally chose to go vegan because I educated myself on factory farming and cruelty to animals, and I suddenly realized that what was on my plate were living things, with feelings. And I just couldn’t disconnect myself from it any longer.”

Pythagoras: “For as long as men massacre animals, they will kill each other. Indeed, those who sow the seed of murder and pain cannot reap joy and love.” Pythagoras recognized the derogatory effects of eating meat a few thousand years before the rest of the world, declaring, “Men dig their graves with their own teeth, and die more by those instruments than by all the weapons of their enemies.”

Cesar Chávez: “I became a vegetarian after realizing that animals feel afraid, cold, hungry, and unhappy like we do. … It was my dog … who led me to question the right of humans to eat other sentient beings.”

Sir Paul McCartney: “If anyone wants to save the planet, all they have to do is just stop eating meat. That’s the single most important thing you could do. It’s staggering when you think about it. Vegetarianism takes care of so many things in one shot: ecology, famine, cruelty.”

Leo Tolstoy: “A human can be healthy without killing animals for food. Therefore, if he eats meat, he participates in taking animal life merely for the sake of his appetite. And to act so is immoral.”

Leonardo da Vinci: “If you are as you have described yourself the king of the animals––it would be better for you to call yourself king of the beasts since you are the greatest of them all!—why do you not help them so that they may presently be able to give you their young in order to gratify your palate, for the sake of which you have tried to make yourself a tomb for all the animals?”

Natalie Portman: “Eating for me is how you proclaim your beliefs three times a day. That is why all religions have rules about eating. Three times a day, I remind myself that I value life and do not want to cause pain to or kill other living beings. That is why I eat the way I do.”

Morrissey: “I think animals look to humans for protection, and of course humans lead them into slaughterhouses, which to me is just like an image of leading children into a slaughterhouse. There’s no difference.” Morrissey’s stringent views on vegetarianism inspired his album with The Smiths’ titled Meat is Murder.

Want to join these historical icons in making a difference in the world by choosing a diet that is good for the planet, for your health, and for animals? Order your FREE vegetarian/vegan starter kit to help you get started today!