A concerned resident called PETA after seeing this feral cat. Take one look at his photo, and you can see why. 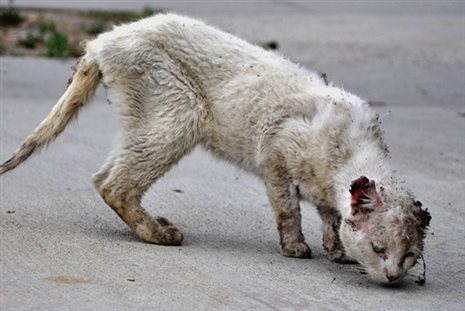 A PETA supporter went to the scene and was able to trap the cat and take him to a veterinarian.

In addition to the cat’s obviously horrific ear wounds, he was suffering from an aggressive and painful form of cancer that had reduced this formerly gorgeous cat to a weak, bedraggled skeleton. The veterinarian immediately put the suffering cat out of his misery, giving him more comfort in his final moments than he had likely known for much of his life.

Unless they are rescued, as this poor cat was, feral cats do not die gently—they incur ghastly injuries and infections, contract painful diseases, are poisoned and shot by people who don’t want them in their yards, are hit by cars, are attacked by wildlife, and so on. Easily treatable conditions for cats who live in our homes, like urinary tract infections and flea infestations, can become miserable and even deadly for cats who cannot be handled.

If there are feral cats in your neighborhood, please don’t prolong their agony by simply putting out food and hoping for the best. Trap them and bring them into your home (but be aware that some feral cats never become tame and spend their lives in hiding, afraid of you and any noise); take them to a reputable open-admission shelter (not a so-called “no kill” shelter that warehouses frightened, unadoptable animals in cages for years); or take them to a veterinarian for a peaceful release from a world that has turned its back on them. I’ve personally done all three, and this last option, while the hardest on me, was by far the easiest on the cat.