On August 6, a severely burned baby raccoon was discovered near Huronia North Park in Barrie, Ontario. The 3- to 4-month-old animal had severe burns on one side of her body and across her face, arms, and stomach, and it’s believed that a flammable liquid was thrown on her. The raccoon, named Phoenix Rose by her caretakers, was receiving treatment for her injuries at a wildlife rehab center when she died suddenly on September 7.

This is a animal abuse case. This 4 month old raccoon was brought to Procyon Wildlife with severe burn injuries to its… 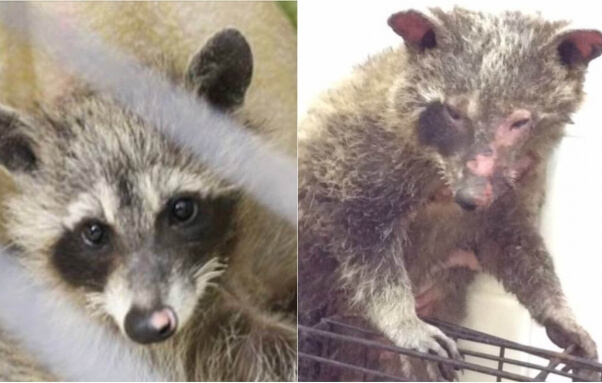 Somebody out there set this baby raccoon on fire, leaving her with severe burns over most of her body, from which she never recovered. PETA urges anyone with information about this case to come forward immediately so that whoever tortured this animal can be held accountable and stopped from hurting anyone else.

The Barrie Police Service is investigating but, so far, hasn’t identified any suspects, which is why PETA is offering a reward of up to $5,000 for information leading to the arrest and conviction on cruelty charges of the person or persons responsible for this crime.

According to leading mental-health professionals and law-enforcement agencies, perpetrators of violent acts against animals are often repeat offenders who pose a serious threat to the community at large.

Share this information with your friends, family members, and social media followers. It might be the only way to apprehend whoever is responsible for this act.

Anyone with information about this case is encouraged to call Crime Stoppers at 1-800-222-TIPS or leave an anonymous tip online at tipsoft.com.