While they’re certainly exciting, there’s no longer anything shocking about headlines like “The Tesla Model 3 Has Gone Completely ‘Vegan’” and “This Car From Polestar Has a Vegan Interior.” That’s because—thanks to PETA and consumers who also know that there’s no excuse for a gentle cow to be killed or a sheep to be shorn bloody—vegan car interiors have become an automobile industry standard, not an exception.

Years ago, we put vegan car interiors on the map—and with a little tenacity and a lot of help from outspoken supporters like you, leather- and wool-free steering wheels and seats are now being offered by major brands, including Tesla, Ford, and Honda. We put in the legwork—reaching out to and meeting with automobile companies and pushing them to replace cruelly obtained materials like leather and wool with innovative vegan materials for their interiors; sharing cutting-edge vegan material suppliers with them; and providing them with information on the ever-growing demand for vegan car interiors through market research and consumer trends.

Which Brands Have Listened?

Our efforts and your persistence have paid off: At least 15 automobile manufacturers—including Jaguar Land Rover, Mercedes-Benz, and Toyota—now offer entirely vegan interiors. 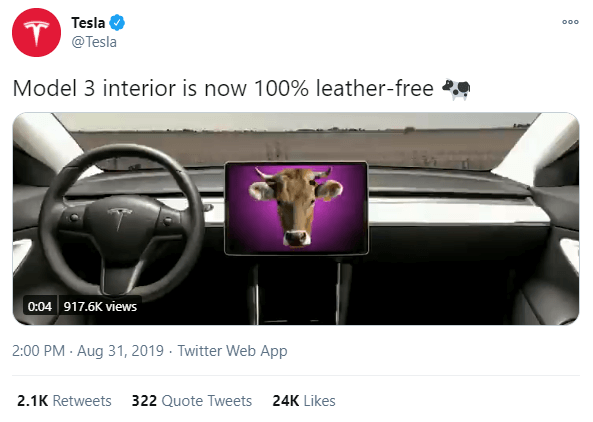 In 2016, a PETA video exposé revealed that workers branded cows on the face without pain relief, electroshocked them, beat them, and then slit their throats and skinned them to produce the leather interiors offered by Volkswagen, Toyota, and other major car brands worldwide. We urged these brands to embrace cost-effective, eco-friendly, humane vegan leather seats and steering wheels. Now, five years later, Toyota touts its SofTex (a vegan leather material) and Volkswagen—following talks with PETA Germany—offers leather- and wool-free interior options for its Atlas S, Jetta S, and Tiguan S models and is set to release an electric SUV featuring vegan apple leather later this year. 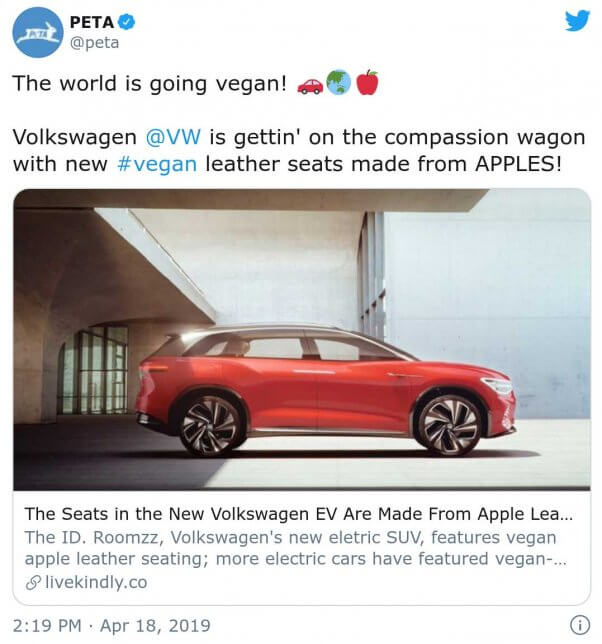 Honda’s vegan interior is standard on its CR-V and HR-V models. BMW has plans to launch a luxury electric SUV called iNEXT later this year, with an interior featuring vegan material that looks and feels like leather. (The brand’s new 5 Series is already available with SensaTec leatherette seats.) Fiat created the new 500 3+1 with SEAQUAL, another vegan material. And Fisker, Inc. (an American electric vehicle maker), is planning to release a battery-powered compact SUV called the Fisker Ocean next year, which will have a vegan interior made of recycled materials such as old tires, plastic bottles, recovered plastic from the ocean, and old fishing nets.

Take a look inside the Fisker Ocean EV that's taking on Tesla for under $40,000 pic.twitter.com/ucTne8Zqt1

Hummer’s new electric truck offers vegan interiors including faux leather “to promote sustainability and avoid the use of animal hides.” Many Mercedes-Benz seats are now covered with Dinamica, a suede-like fabric made from recycled plastic bottles and clothing fibers—several models including the A-Class, B-Class, and CLA now come standard with such vegan interiors, and the new S-Class’ seats, steering wheel, and trim can be specially ordered vegan. In addition, the luxury vehicle company is working on a futuristic concept car that’ll come standard with vegan leather.

Volvo’s Polestar 2 also features modern, eco-friendly materials, which means it doesn’t use leather or wool. Instead, it has WeaveTech vegan upholstery, which was inspired by the “sporty look and feel” of wetsuits.

Take a peek into the future with the high-performance Polestar 2.

This 100% electric AND vegan car from @PolestarCars could be yours! Bid TODAY in PETA’s 40th anniversary auction to contribute to our vital work for animals: https://t.co/XZqqYpFzKc #PETA40 pic.twitter.com/uSEc3sXGww

Lucid Motors, Rivian, Skoda, and Thor Industries (an RV company) are doing great things with vegan materials, too, a move that will not only offer cows and sheep some of the consideration and respect that they’ve always deserved but also reduce these companies’ carbon footprints. Turning animals’ skin into leather requires up to 130 different chemicals—including cyanide, which can pollute the groundwater near tanneries. Leather made of animal skin is at least three times worse for the environment than vegan leather. Wool production is also exacerbating the environmental crisis: Raising sheep contributes to climate change, soil erosion, and water pollution. And PETA and our affiliates’ investigations into more than 100 farms across Australia, Europe, North America, and South America have documented that workers systematically beat and mutilate sheep for their wool. When they’re considered no longer useful to the industry, sheep exploited for wool are inevitably killed and sometimes even skinned alive.

All of these investigations have revealed that sheep are beaten, punched, kicked, stepped on, sliced while roughly sheared, and more.

As so many automotive manufacturers are committing to using sustainable, animal-free materials now and by next year, it makes us wonder: What’s got General Motors (GM) dragging its tires? While we turn up the heat on GM and continue to urge all car companies to make every single model sold 100% leather-free and vegan, you can help. By choosing eco-friendly vegan materials whenever possible, you can show companies that your support lies with animals and the environment. Click below to write to GM, too—ask the brand to make it easy for customers like you to choose compassion by switching gears to fully vegan car interiors:

For Cows’ Sake, Urge General Motors to Do Better