You might expect to see gloomy angels descend to Earth during the end times, but yesterday in Oakland, California, two PETA angels were all smiles as they offered passersby a sweet treat ahead of California resident Harold Camping’s predicted apocalypse. It was a flurry of halos, wings, and lingerie as our angels for animals handed out vegan cookies and nearly 500 vegetarian/vegan starter kits. 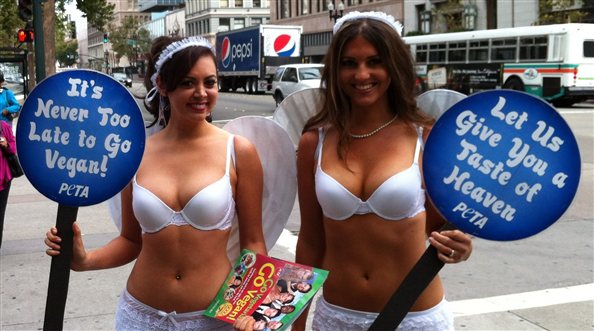 In addition to providing delicious vegan victuals to help make the eve of the rapture as pleasant as possible, the angels reminded passersby that eating animal products supports hell on Earth for animals. Pigs, cows, and chickens are raised in cramped, filthy conditions before being crammed onto trucks and dumped at slaughterhouses where they suffer slow, agonizing deaths as they are hung upside down by their legs and have their throats cut while still conscious.

To make your last supper before the world ends a compassionate one, check out PETA’s vegetarian/vegan starter kit. As one passing admirer said about our angels, “Vegan—is that what they are? I want to do that!”