UPDATE: Just days after a baby giraffe died after running headlong into a fence, a capybara has apparently lost his or her life because of an attack by an anteater. These two species rarely interact in nature, and their compatibility in forced proximity should never have been assumed. PETA urges all families to steer clear of this deathtrap for animals.

After last weekend’s death of a baby giraffe, PETA called for an end to the zoo’s giraffe breeding program. 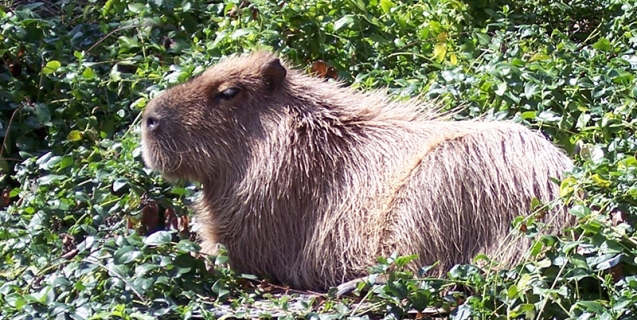 According to a local news source, a 1-month-old giraffe at the Fresno Chaffee Zoo in central California has died after colliding with a zoo enclosure’s fence. According to reports, the incident occurred during a preview for a new exhibit at the zoo, scheduled to open this week.

Baby giraffe dies Sunday after running into fence at zoo in Fresno http://t.co/65a27FeuBa

This death comes just months after Kipenzi, a baby giraffe at the Dallas Zoo, experienced the same fate, dying after she ran into the perimeter wall of an enclosure and broke her neck. Other giraffes who have died prematurely in captivity include Amali at the Tulsa Zoo and several giraffes at zoos in the Southwest.

HEARTBROKEN: We are devastated to share the tragic loss of our beloved giraffe calf, Kipenzi. This evening as the…

Aside from the obvious dangers of confining giraffes to zoo enclosures—even the largest of which are tiny compared to the massive home ranges of wild giraffes—keeping these animals in captivity can also cause them to develop stress-induced maladies that can lead to a premature death.

The adventure has begun! On Wednesday, a male reticulated giraffe was born at Fresno Chaffee Zoo. The calf is the first…

Giraffes belong in the wild, not in enclosures, which present many opportunities for these timid animals to become injured and include conditions that are inherently stressful to them. Even under the best of circumstances, captivity cannot begin to replicate their natural habitats.

Instead of patronizing zoos, support groups like the International Primate Protection League and Earth Island Institute that work to preserve animals’ natural habitats.