Audiences keeping up with the Tiger King series have learned by now that the cruelty of roadside zoos and animal exhibitors doesn’t end with “Joe Exotic.” The numerous animal welfare issues throughout Netflix’s Tiger King 2 and spinoff Tiger King: The Doc Antle Story can be found off-screen, too, at countless roadside zoos, which exploit tigers, lions, and other animals for profit.

Here are some key animal welfare issues to look out for in Tiger King 2  and Tiger King: The Doc Antle Story that show how animals suffer at miserable tourist traps. Don’t support a facility if any of these red flags are in evidence:

Guests Are Allowed to Have Direct Contact With Animals

We know that big cats can become infected with the virus that causes COVID-19 and that they can get it from humans. (Just last month, snow leopards at a Nebraskan zoo died of the disease.) But Tiger King 2 and The Doc Antle Story show that there’s apparently no regard for the risk that guests can pose to the animals trapped in cages. In one Tiger King 2 scene, a guest is seen feeding a camel from her mouth.

The irresponsible and inhumane handling of wild animals is also dangerous to staff members and the public. In Tiger King 2, handlers are seen reaching through cages holding adult big cats and even opening a gate to toss food to a lion (giving the animal an opportunity to escape). One scene in The Doc Antle Story shows Antle and his staff walking a group of tigers on leashes.

In their natural habitats, tigers, lions, and other big cats run and explore vast territories. When roadside zoos confine these animals to barren, small enclosures with no stimulation, they often frantically pace to cope with the extreme distress that these miserable conditions can cause. One way to find out whether animals are pacing inside their enclosures is by looking for worn paths on the barren ground along the perimeter of the cages.

Animals Exhibit Aggression as a Result of Unnatural Conditions

In addition to having a natural urge to run, hunt, and patrol wide spaces, tigers are typically solitary animals—but the roadside zoos seen in Tiger King 2 force them to live in unnatural social groupings. These kinds of conditions can lead the animals to develop abnormal behavior besides pacing, such as aggression.

Exhibitors often force animals to comply using physical intimidation and violence. In Tiger King 2, one handler walks an adult tiger on a chain while holding a prod.

In The Doc Antle Story, Bhagavan “Doc” Antle is shown holding a long wooden cane while approaching big cats and while riding an elephant named Bubbles. (It’s standard practice at many roadside zoos to beat elephants as babies in order to break their spirits so that they can be used for rides and other public interactions.) Another villain who’s interviewed in the series—disgraced exhibitor Karl Mitchell—smacks a tiger in the face. 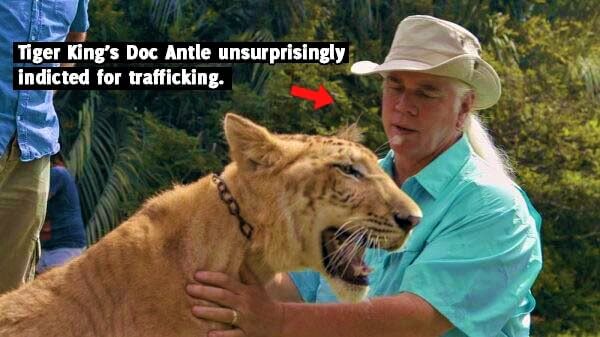 Handlers Use Monkeys as Props

Tiger King villain Tim Stark—owner of the now-defunct roadside hellhole Wildlife in Need—returned in the second season of the series, accompanied by a spider monkey he apparently keeps as a “pet.” In nature, spider monkeys inhabit dense, lively rainforest canopies with dozens of other individuals of their species. Parading these complex, social animals around like toys can severely affect their well-being.

Birds of Prey Are Kept on Tethers

In their natural habitats, birds of prey—such as owls and eagles—typically fly solo, using their heightened senses to catch prey and find shelter. In Tiger King 2, Stark displays an owl who is tethered by his claws to a group of guests. When the bird tries to fly away, Stark roughly holds him by his legs upside down.

In The Doc Antle Story, a handler displays an eagle who is tethered and blindfolded, rendering the bird completely vulnerable. Eagles are extremely visually oriented and use their keen eyesight to detect the smallest movements from great distances—and treating them this way is extremely cruel.

Since Tiger King first aired, we’ve seen nearly every villain from the first season go to prison, be put out of business, or face criminal charges, animal welfare citations, or civil lawsuits. Even though PETA helped accomplish major victories—including winning a lawsuit against Stark and confiscating 25 big cats from him and his former disgraced business partner Jeff Lowe—other animals are still suffering at decrepit roadside zoos.