“Anybody can start one or run one. No one will be looking over their shoulder.” That’s how Julie Levy, a professor of animal shelter medicine at the University of Florida, described the glaring lack of regulations and inspections required for self-professed animal “rescues” in the state. This problem isn’t limited to Florida. In most states, “rescue groups,” individual self-styled “rescuers,” “foster homes,” and other similar entities aren’t held to many—if any—legal standards of animal care.

The results are disastrous: Animals are suffering and dying in horrifically painful ways at the hands of those who claim to be “rescuing” them. Caring people must contact their legislators and demand action on this abysmal situation—read on to learn how.

Starving to Death, Just Feet Away From Food

PETA recently obtained crime scene photos from inside an apartment owned by Cheryn Smilen, a self-professed “rescuer” in Miami who was sentenced to nearly a year in jail for leaving the cats she had hoarded to starve to death. 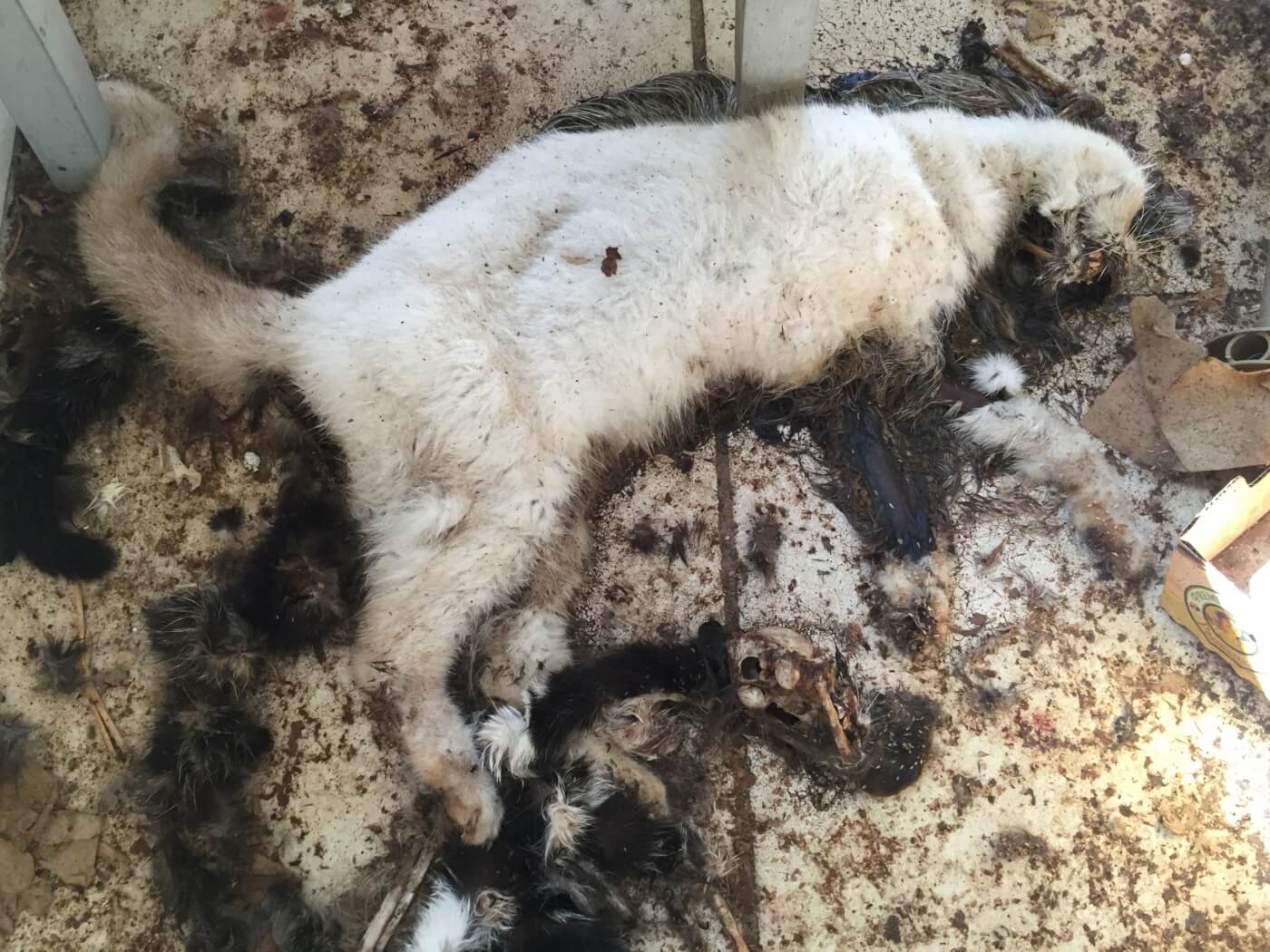 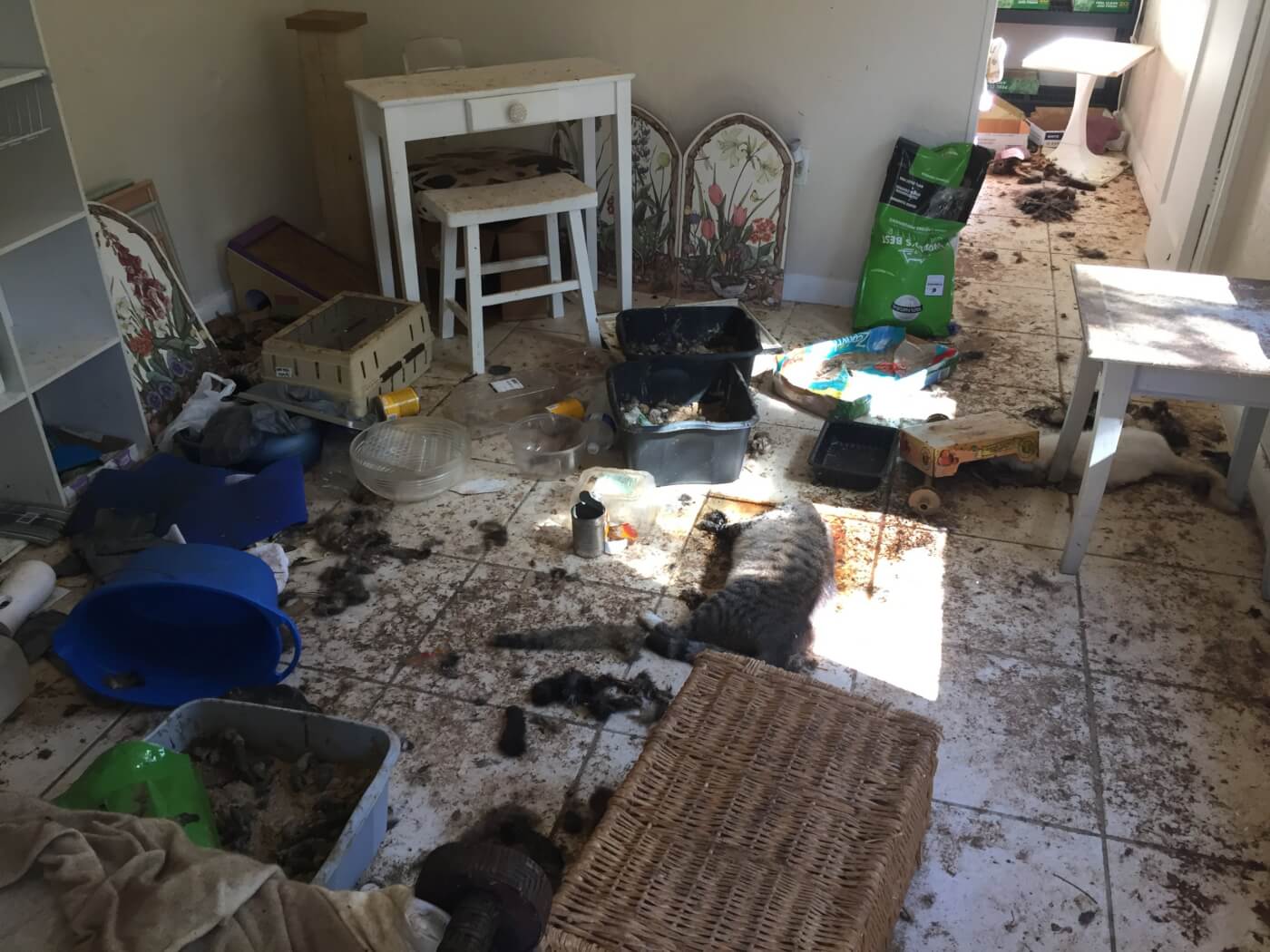 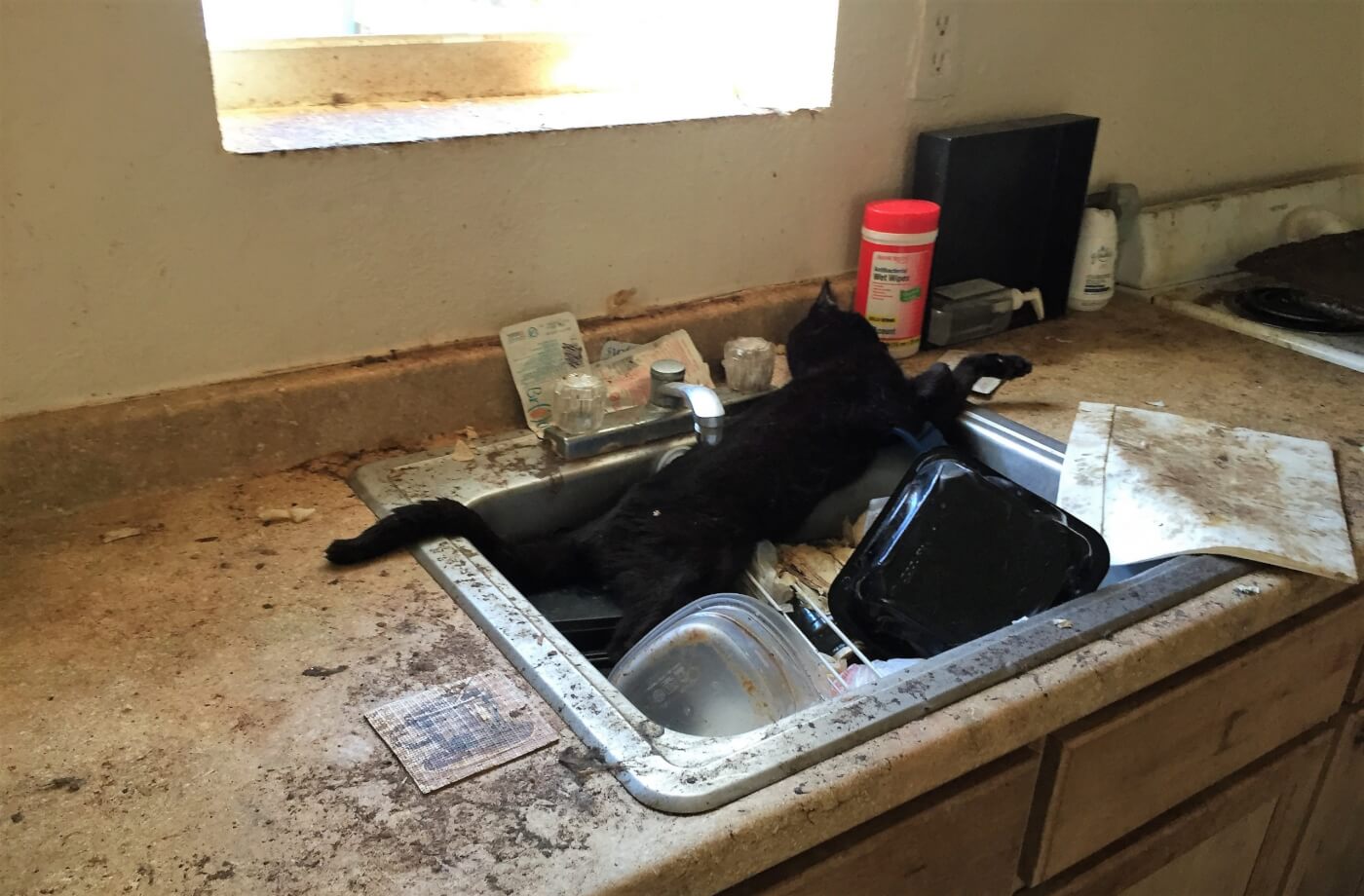 Neighbors often saw cats crying and scratching at the windows inside Smilen’s tiny one-room apartment. But what finally prompted police to investigate was the overpowering stench. Inside, they found “dead cats over dead cats over dead cats,” in various stages of decomposition. Feces and urine covered the stiflingly hot space, and fleas jumped on a detective’s legs. 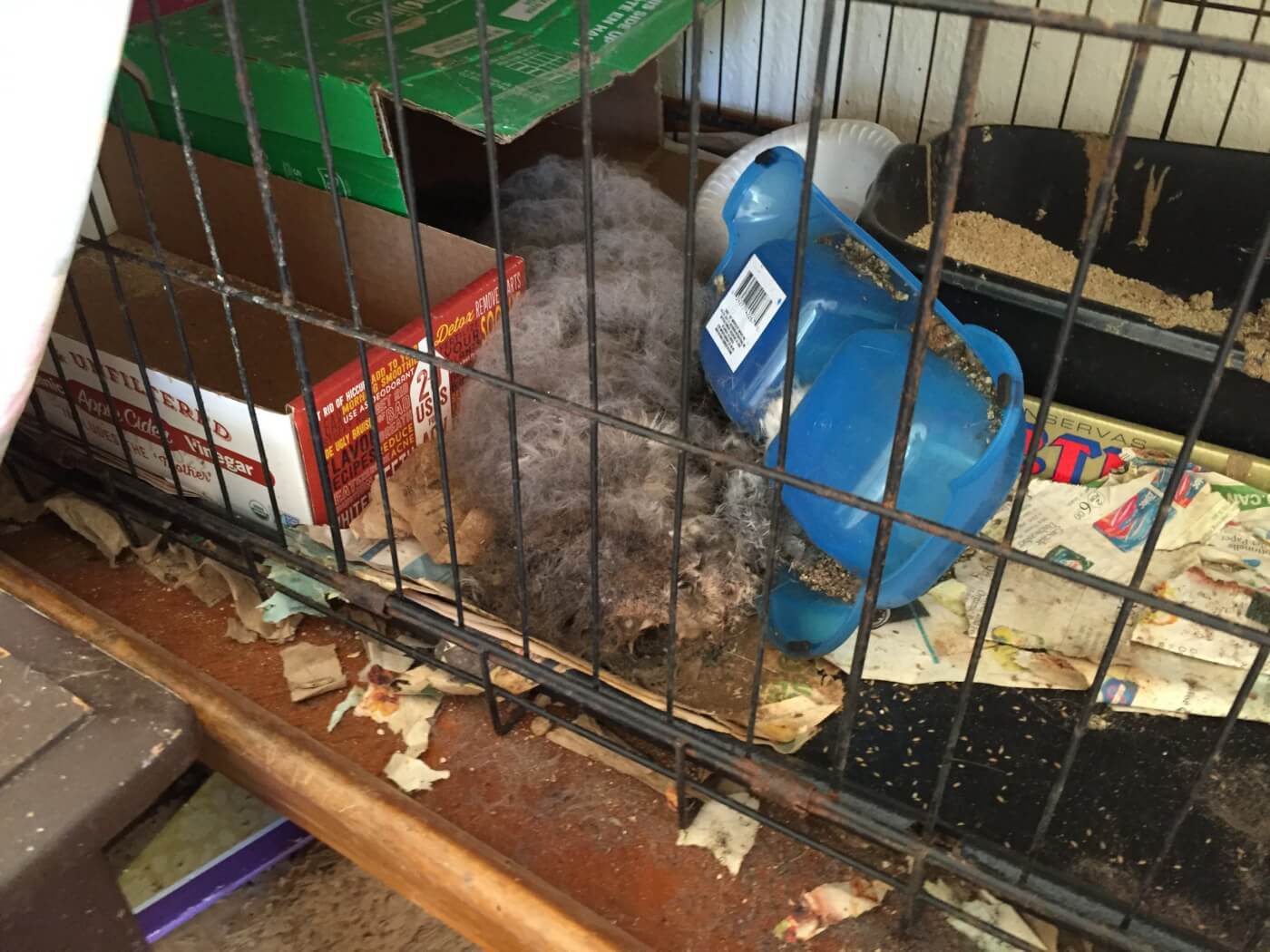 Amid this squalor, dozens of emaciated, starving cats were struggling to survive. Video footage that PETA obtained shows one cat who appeared to be dead but who was still breathing, barely clinging to life. In their desperation, some cats had apparently resorted to eating those who had died: Bones from their cannibalized corpses littered the apartment. A large stockpile of cat food sat unopened, just feet away from the starving animals. 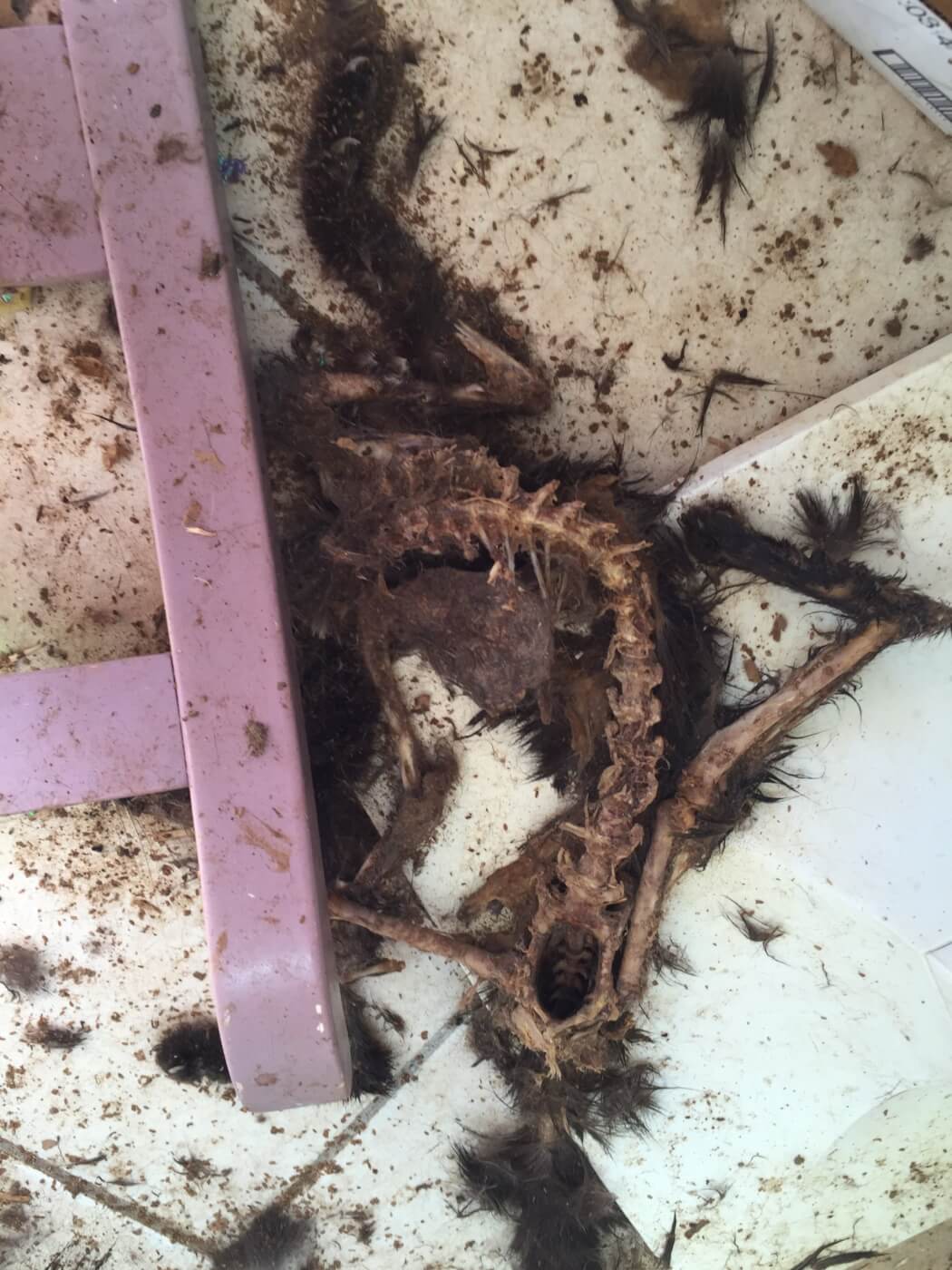 Betrayed by Shelters, Handed Over to Abusers

The misery that these cats endured is difficult to think about. But what’s almost equally disturbing is how many of them ended up in this horrific situation: PETA uncovered records showing that at least some were given to Smilen by animal shelters.

Let that sink in: Animal shelters—the very facilities that are supposed to provide vulnerable animals with a haven and protect them from abuse—handed over cats to a “rescuer” who neglected them, kept them in squalor, and left them to starve. The shelters moved these cats out of their doors, marked them as a “live release,” and apparently never bothered to check on them again. Such tactics may keep shelters’ euthanasia statistics looking (artificially) low, but they often result in the loss of animals’ lives.

It’s all part of the misguided push to “save them all” and avoid euthanasia at any cost. But it isn’t saving animals at all—it’s dooming them to suffer and die at the hands of people like Smilen. Hundreds of other cases in which “rescues” have hoarded, abused, and fatally neglected animals have been reported all over the U.S., including at K9 and Feline Assistance Program, Bully Breed Miracle Network and Rescue, Tails of Courage Animal Rescue, and Tiggy Town Rescue, to name just a few.

Untold numbers of animals are languishing and dying right now at self-professed “rescues” that are operating under the radar, because no one is keeping track of what happens to “live release” animals once they leave shelters and no one is investigating “rescues.”

“We gave up on rescues because they come and go, and many of them are quite disorganized,” said Levy, explaining why the University of Florida doesn’t track such groups. “They don’t keep the data in the first place.” As a South Florida Sun-Sentinel reporter aptly put it, “[T]he lack of oversight grants … rescues a loophole big enough to fit a busload of bad intentions.”

How many more animals will suffer and die before elected officials take action to regulate this out-of-control industry?

Please contact your state and local legislators and demand that all animal “rescue” groups be regulated and regularly inspected. Please also insist that taxpayer-funded animal shelters be required to accept all animals instead of turning them away. This is vital for their safety and to keep them out of the hands of abusers like Smilen.

If your local animal shelter allows groups or individual “rescuers” to take animals, please insist that it be required to inspect their facilities first and regularly follow up, including by conducting unannounced visits. As Smilen’s case and hundreds of others have made painfully clear, blind trust isn’t enough when it comes to safeguarding vulnerable animals.