Victory! American Greetings, the second-largest greeting card company in the world, has confirmed that it no longer sells greeting cards with demeaning images of endangered chimpanzees.

This exciting development follows years of pressure on American Greetings from PETA to ban such cards—including tens of thousands of e-mails and calls from our supporters, demonstrations at the company’s headquarters, and a protest at the home of its CEO, Joe Arcuri. Chris Palmer, an Emmy Award–winning wildlife documentary producer, previously sent a letter on PETA’s behalf to Arcuri, urging him to end the company’s sale of cards that feature “inappropriate, inaccurate, and unethical” images of great apes, such as chimpanzees wearing costumes or holding hands with humans. 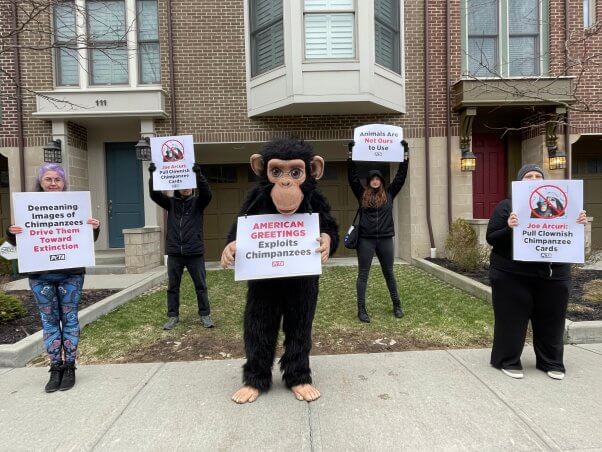 American Greetings joins top stock-image agencies, including Dreamstime, Getty Images, and Shutterstock, that are banning the commercial use of inappropriate images of chimpanzees, as well as major retailers such as CVS and Rite Aid, which have taken action to remove these damaging greeting cards after hearing from PETA.

Chimpanzees may face extinction within our lifetime, and greeting cards featuring clownish images of them are hurting conservation efforts.

Studies have shown that frivolous staged images of chimpanzees wearing costumes, displayed in studios, or interacting with humans mislead consumers to believe that these animals are prevalent in nature rather than endangered. They also increase the black market demand for great apes as “pets”—driving them even further toward extinction.

Chimpanzees need to be protected, not made the butt of a joke. Making a mockery of them is a form of speciesism—the misguided belief that other animals are less deserving just because of their species.