Update (July 22, 2022): The journal Science has released a months-long investigation into what has been considered a crucial Alzheimer’s experiment on rats, concluding that the experimenter may have faked his results.

This is a devastating loss for humans who need viable treatments for Alzheimer’s disease and for the millions of animals who suffered because someone cared more about accolades than good science. Unfortunately, it’s just one of thousands of examples demonstrating the tendency of animal experimenters to overstate the value of their research and of the National Institutes of Health’s (NIH) almost complete lack of scrutiny concerning how it spends taxpayer dollars. In this case, it seems that experimenters using mice and rats have misled the entire Alzheimer’s research community, wasting hundreds of millions of dollars in public funding of efforts to cure a disease that kills more than a million humans each year. This situation comes as no surprise to PETA, which has spent decades exposing experimenters’ lies and NIH’s refusal to take action. The entire system must be overhauled, and again, we urge NIH to accept PETA’s Research Modernization Deal.

Update (November 30, 2021): PETA scientists have pressed for more funding of human-relevant studies and less funding of failed animal experiments. Now we see why. For the first time ever, researchers have used human data in a recent study to quantify the speed of different processes that lead to Alzheimer’s disease and found that it develops in a very different way than previously thought.

It’s no wonder—as our Research Modernization Deal shows, mice are not humans and tests on these animals have repeatedly failed to develop effective drugs for the disease.

Using post-mortem brain samples from Alzheimer’s patients as well as PET scans from living patients, the team, led by the University of Cambridge, uncovered novel information about the way the disease progresses. For example, researchers discovered that rather than originating in a single location in the brain—which is the case in mice—and then spreading out, Alzheimer’s disease in humans reaches multiple regions of the brain early on in the disease’s progression.

Our fellow animals are not test tubes to be used in useless experiments, and this new study provides even more evidence that we need to prioritize the modern, non-animal research outlined in PETA’s Research Modernization Deal:

Update (November 28, 2018): Chalk up another epic fail for Alzheimer’s disease experiments on animals.

At a recent scientific conference, not one but three pharmaceutical companies announced the stunning failures of experimental Alzheimer’s drugs that had tested successfully in mice—who must be genetically engineered to develop a pseudo-Alzheimer’s condition. The compounds—known as BACE inhibitors—actually appeared to hurt patients by worsening their cognitive abilities and causing brain shrinkage.

Here’s how the journal Nature describes this increasingly long list of treatment disappointments: “Drug companies have spent billions of dollars searching for therapies to reverse or significantly slow Alzheimer’s disease, to no avail.”

Alzheimer’s patients deserve so much better than this. As one molecular biologist put it, “The biggest mistake you can make is to think you can ever have a mouse with Alzheimer’s disease.”

Experimenters must adopt superior, non-animal research methods that are actually relevant to human physiology. For example, a just-published “landmark” study using cells from human brains has provided new insight into how Alzheimer’s develops and may lead to effective treatments.

After a string of failures, experimenters are finally realizing that the way they’ve been trying to develop treatments for Alzheimer’s disease has gotten them nowhere.

Gee, that only took decades of wasted time and money, more than 100 failed drugs, and an untold number of animals’ lives.

For years, experimenters have tormented mice, dogs, and other animals in an effort to come up with drugs to treat Alzheimer’s disease. Trouble is, those animals don’t get Alzheimer’s. So experimenters manipulate an animal’s genome to force the buildup of amyloid plaques similar to those in the brains of people with the disease. The result: Animals seem to have relief from symptoms that look like Alzheimer’s—but aren’t.

In the meantime, human patients continue to suffer.

The failure rate in humans for new Alzheimer’s drugs now stands at a staggering 99.6 percent. You can include Eli Lilly’s much-hyped solanezumab among those duds. That drug had been tested successfully in mice and monkeys. But it turned out to be an abject failure in clinical trials. 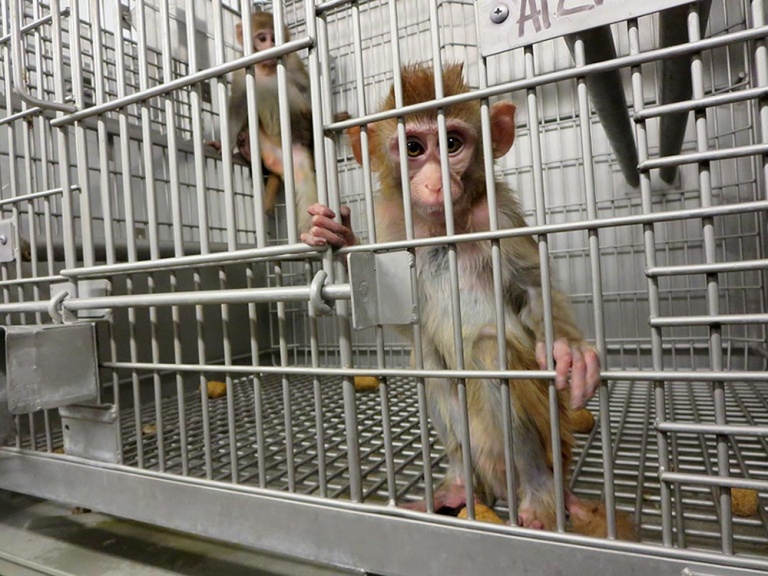 Now that experimenters admit that they’ve made just about zero progress, it’s time they took their heads out of the sand and rejected the use of animal “models” that can never replicate human forms of dementia.

Instead, they should adopt superior, non-animal research methods that are actually relevant to human physiology.

How YOU Can Help Patients With Alzheimer’s Disease

And urge your congressional representatives to support PETA’s Research Modernization Deal, which maps out a strategy for replacing the use of animals in experiments with human-relevant methods.