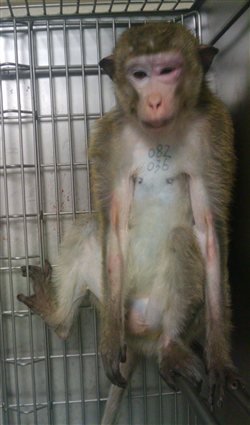 When we told you that Air France was planning to ship 60 monkeys to the notorious Shin Nippon Biomedical Laboratories (SNBL) this week, you came through with tens of thousands of e-mails, Facebook posts, tweets, and phone calls—and thanks to your quick action, Air France has now confirmed that the shipment has been canceled!

Immediately upon learning that the monkeys were to be shipped from a Bioculture-owned monkey farm on the African island of Mauritius to Paris and then on to Chicago, where they’d be loaded onto a truck bound for a facility operated by SNBL, PETA got in touch with key executives at Air France urging them to cancel the shipment.

But with so little time to persuade Air France to do the right thing, PETA swiftly appealed to members and supporters to make sure that the airline got the message. And did it ever—so many of you contacted Air France that the company stopped accepting public comments on two of its high-profile Facebook pages and shut down its corporate phone lines!

While Air France’s decision to cancel this shipment is great news, PETA is now encouraging the French flag carrier to join the majority of leading airlines in putting formal policies in place prohibiting all future shipments of primates to laboratories.

How You Can Help Keep Primates Out of Labs