A big brouhaha erupted after the Detroit Animal Control Center euthanized an emaciated, injured and extremely ill dog named Ace (after the hardware store into which he painfully stumbled before being rescued off the streets) on Thursday. Photos of Ace make it abundantly clear that he was suffering; they show him looking weak, hunched over, grimacing, bleeding from a neck wound, and barely able to stand. He looks as if he can’t get comfortable, and there is obvious pain in his eyes. Unfortunately, Ace had to endure the state-mandated four-day waiting period for strays, and no owner could be located for him (or they surely would have faced cruelty charges). This suffering dog didn’t deserve to linger a minute longer.

We just have one question: The shelters are overloaded with homeless dogs―if anyone is upset because this dog was put down, why don’t they stop screaming “Murder!’ and do something truly helpful, like adopting another dear dog who doesn’t need as much vet care and resocializing but just needs a home? There’s certainly no shortage of homeless dogs in every single animal shelter in the country―no, make that, in the world! If you think that every single one―or even one in 20―can be placed, then you’re living in a dream that we all wish would come true, but picking one dog and going nuts about his euthanasia is just a feel-good exercise not grounded in reality. Shelters need financial help for spaying and neutering in order to stop more dogs from being born and to find truly good homes even for dogs with no problems, the “easy” ones. Meanwhile, “no kill” shelters take in their quota and then leave the dirty work to everyone else. 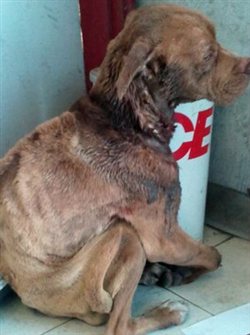 But back to Ace―for dogs who have been through so much and are obviously suffering and miserable, a dignified release from their pain is often a blessing and the most humane option. Let’s not misplace our anger and frustration, which should be directed at those who neglect animals so badly that they end up ravaged with parasites and barely able to keep their heads up as well as at those who cause animals to end up homeless and euthanized at shelters because they buy from pet stores or breeders and/or fail to spay or neuter their animals.

And let’s use our energy to save lives by promoting spaying and neutering and lobbying for legislation that would restrict breeding so that we can arrive at a day when no animal is born unless a loving, permanent home is waiting for him or her. Animal homelessness is a preventable tragedy.