When Banana Joe was announced as this year’s Westminster winner, his handler, Ernesto Lara, was given a silver bowl. But perhaps he should have been handed a silver shovel so that he could help bury all the dogs in animal shelters who lost their chance at a home, thanks to the greedy breeders and cruel puppy mill owners who supplied Westminster’s contestants and who will supply the countless “designer dogs” yet to be born because of shows like this one.

Outside Madison Square Garden, a costumed dog flanked by PETA members pointed out to attendees what purebred pimps really do: They flood the market with puppies even as 3 to 4 million dogs are being euthanized every year for lack of a good home. 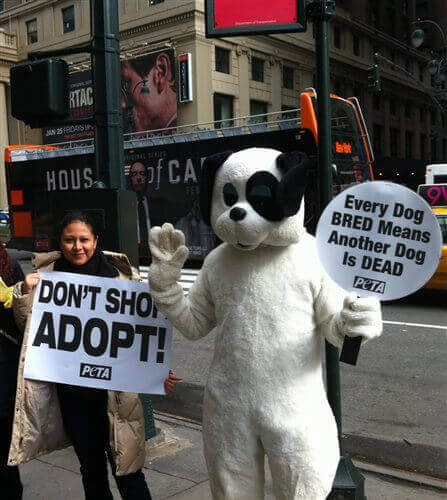 In fact, Lara won’t even be keeping Banana Joe—he will be returning the dog to his breeder.

The results are in: Real winners adopt from animal shelters.