Update: We did it! Herbert Diess, the CEO of Volkswagen (VW), has confirmed to PETA Germany that the company will never again use animals in testing unless required to do so by law. Diess added that the company’s code of conduct will be updated later this year to include the ban. This tremendous victory was made possible by PETA Germany’s communications with VW executives, protests at the company’s headquarters, and the overwhelming number of e-mails that PETA supporters sent to VW after its outrageous and cruel inhalation tests on monkeys were exposed. More than 160,000 of you took action in the U.S. alone. Thank you for speaking up. 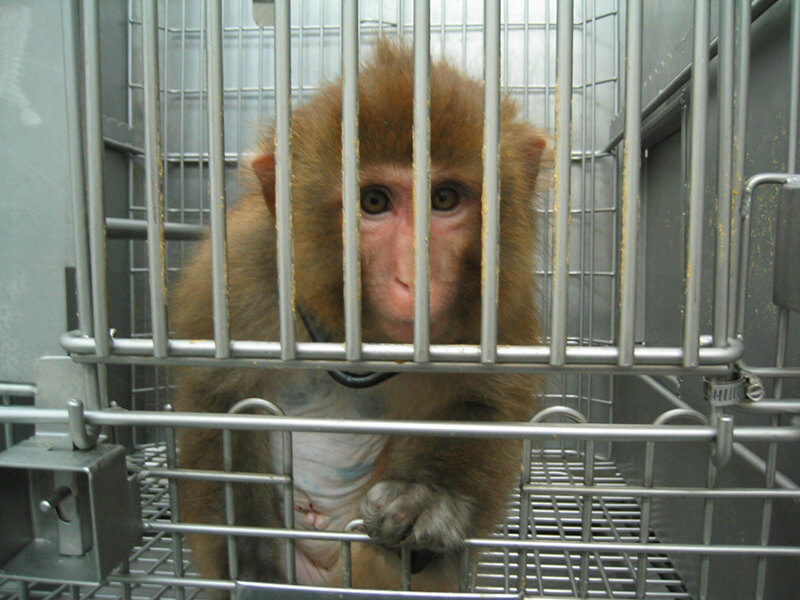 Volkswagen has come under intense criticism for funding an experiment in which macaque monkeys were locked in chambers and forced to inhale diesel fumes emitted from an old pickup truck and a Volkswagen Beetle for four hours. When this was publicized, the company issued statements apologizing for the cruel and useless testing and promised never to conduct emissions testing on monkeys again. But when asked by PETA to pledge not to conduct ANY tests on animals or pay others to do so, it refused.

According to an article in The New York Times, after the World Health Organization moved to classify diesel exhaust as a carcinogen, carmaker Volkswagen commissioned an experiment on macaque monkeys. After the cruel testing, samples of the animals’ lung tissue were removed to check for inflammation. It’s not known what happened to the animals after this. A video clip of similar experiments can be seen in the first episode of the new documentary Netflix series Dirty Money.

Shockingly, the Beetle used in the experiment had been rigged to produce fewer emissions than normal. While Volkswagen pleaded guilty to charges that it shamefully manipulated its emissions data, the Lovelace Respiratory Research Institute (LRRI), where the experiment took place, has a sordid history of its own. The Albuquerque, New Mexico, contract laboratory is infamous for neglecting and abusing the animals it imprisons.

For example, a monkey at LRRI who “experienced adverse complications” stopped eating, but the attending veterinarian wasn’t consulted, and the animal was eventually found dead in her enclosure. An anesthetized dog suffered respiratory arrest and died when his lungs overinflated because a device to measure pulmonary function was not used properly. Six guinea pigs suffocated to death when they were tightly packed into a small enclosure to be transported and then left there for nearly an hour.

In 2011, LRRI was cited by U.S. authorities for six violations of the federal Animal Welfare Act—including the strangulation death of a monkey who became caught on an experimental jacket and the escape of an infant monkey—and fined $21,750.

The suffering of the animals used in this experiment began long before LRRI got its hands on them. They were likely bred on one of the so-called “monkey farms” in China—infamous for their horrible conditions—and then sold to Charles River Laboratories, one of the world’s largest suppliers of animals to laboratories and a company so heartless that its CEO ranks near the top of our Dirty Dozen list of worst CEOs for animals.

Monkeys—highly intelligent and social animals—endure extreme deprivation in barren laboratory enclosures. And because there are biological and genetic differences between them and humans, the results of experiments on them are useless in predicting human responses to things like inhaling diesel exhaust.