Gelatin is a protein obtained by boiling skin, tendons, ligaments, and/or bones with water. It is usually obtained from cows or pigs. Gelatin is used in shampoos, face masks, and other cosmetics; as a thickener for fruit gelatins and puddings (such as Jell-O); in candies, marshmallows, cakes, ice cream, and yogurts; on photographic film; and in vitamins as a coating and as capsules, and it is sometimes used to assist in “clearing” wines. Gelatin is not vegan. However, there is a product called “agar agar” that is sometimes marketed as “gelatin,” but it is vegan. It is derived from a type of seaweed.

Kosher symbols and markings are not reliable indicators on which vegans or vegetarians should base their purchasing decisions. This issue is complex, but the “K” or “Kosher” symbols basically mean that the food-manufacturing process was overseen by a rabbi, who theoretically ensures that it meets Hebrew dietary laws. The food also may not contain both dairy products and meat, but it may contain one or the other. “P” or “Parve” means that the product contains no meat or dairy products, but it may contain fish or eggs. Kosher gelatin is usually made from a fish source. “D,” as in “Kosher D,” means that the product either contains milk or was made with dairy machinery. For example, a chocolate and peanut candy may be marked “Kosher D” even if it doesn’t contain milk because the nondairy chocolate was manufactured on machinery that also made milk chocolate. 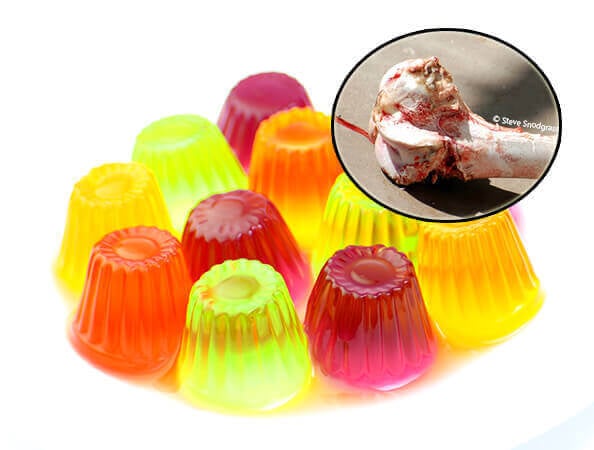 Can’t believe that your Jell-O actually was alive? Check out more disgusting things that might be hiding in your food.