Vallejo, Calif. – A Compassionate Fire Department Award is on its way from PETA to the Vallejo Fire Department and firefighter Scott Barger, who was putting out a vegetation fire on the evening of Sunday, June 27, when he found two crying kittens. He watched over them until animal control arrived—and once the kittens recover from minor burns and get a bit older, he’ll adopt one and his parents will adopt the other. 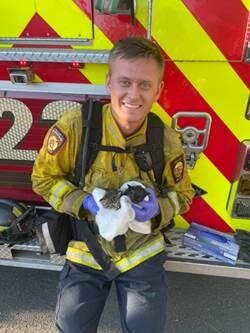 “Thanks to Officer Barger, these two little kittens got out of the fire and will get into a family,” says PETA Vice President Colleen O’Brien. “PETA hopes their story will inspire everyone to keep an eye out for animals in need.”

While these kittens are on their way to new homes, an estimated 70 million other cats and dogs are homeless in the U.S. at any given time. An estimated 10% of them end up in animal shelters, where many must eventually be euthanized for reasons including injury, illness, old age, emotional and psychological damage, and a lack of good homes. That’s why PETA advocates for adoption and urges guardians to have their animal companions spayed or neutered.

The Vallejo Fire Department will receive a framed certificate, a signed letter from PETA President Ingrid Newkirk, a box of vegan cookies, and a copy of The Engine 2 Diet, written by a former firefighter and professional triathlete.