Miami – Passengers arriving at Miami International Airport got an eyeful this afternoon as a pair of PETA “orcas”—wearing little more than chains and black–and-white bodypaint—climbed to the top of the baggage carousels to demand, “Miami Seaquarium: Free Lolita!” before they were removed from the baggage belt in handcuffs. The plea comes in behalf of the lonely orca who has been displayed in the smallest tank in North America for over 45 years. 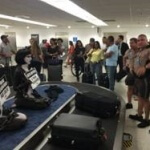 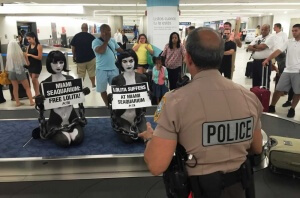 “Our protesters drew visitors’ attention to the suffering that animals endure at the Miami Seaquarium, where a lonely orca swims endless circles in a tiny concrete tank,” says PETA Executive Vice President Tracy Reiman. “PETA is calling on visitors to Miami and the Seaquarium to join us in demanding Lolita’s release to a coastal sanctuary.”

Since 1970, Lolita has been in a tiny concrete tank without protection from the sun. And she’s been without a companion of her species since 1980, when her last tankmate, Hugo, died from injuries sustained when he rammed his head into the tank’s concrete wall in an apparent suicide. PETA—whose motto reads, in part, that “animals are not ours to use for entertainment”—has filed an appeal in its lawsuit contending that these conditions violate the Endangered Species Act and is pushing for Lolita to be released to a seaside sanctuary that’s waiting for her in her home waters in the Pacific Northwest.