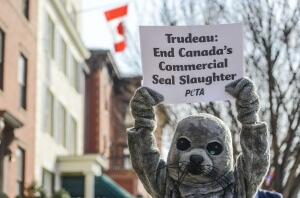 Note: The proximity of PETA’s “spokeseal” to the prime minister will depend on event security.

“Kind people around the world have condemned the beating, shooting, and skinning of baby seals, yet the Canadian government keeps throwing money away by propping up this dying industry,” says PETA Executive Vice President Tracy Reiman. “PETA is calling on Prime Minister Trudeau to prove himself a true progressive by ending subsidies to the cruel commercial seal slaughter.”

PETA—whose motto reads, in part, that “animals are not ours to wear”—has more information on the campaign against the commercial seal slaughter available here, and more photos will be available upon request after these events. Please let me know if you have any questions or if there’s any further information I can provide. Many thanks.