Madison, Wis. – On Saturday, PETA supporters in sheep, cow, and goose masks will raise a ruckus outside the Urban Outfitters store on State Street to demand that the company stop selling wool, leather, down, or any other materials cruelly obtained from animals. 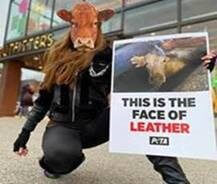 It’s all part of PETA’s campaign in the country’s “best college towns and cities”—in which Madison ranked eighth of midsize cities—to call on students and other shoppers to embrace eco- and animal-friendly fashion and encourage Urban Outfitters to do the same. PETA has also wrapped an entire bus with the faces of a sheep, a cow, and a goose making a plea: “We Want You to Change. Wear Vegan.”

Consumers’ concern for animal welfare and the environment has sent the vegan fashion market skyrocketing: Shopping platform Lyst recently reported a 178% increase in page views for vegan leather, and a survey conducted by Glamour revealed that around 73% of Gen Z consider themselves animal rights activists.

PETA notes that workers hit, kick, and mutilate gentle sheep for their wool; burn, electroshock, beat, and slaughter cows for leather; pluck geese so roughly for down that they shriek in pain and fear; and abuse animals for fashion in other ways.

PETA—whose motto reads, in part, that “animals are not ours to wear” and which opposes speciesism, a human-supremacist worldview—has also protested at other Urban Outfitters brands’ stores across the country. For more information, please visit PETA.org or follow the group on Twitter, Facebook, or Instagram.