Just in Time for 'Shark Week,' Colorful Installation Reminds Us That Humans Are the Most Dangerous Predators in the Water

Washington – “Shark Week” is here—and so is a large 3-D “shark,” impaled with a spear and swimming straight out of a blood-spattered seascape on the front of PETA’s 16th Street office, a dozen blocks from the White House. The massive fish is accompanied by a banner with a huge human mouth proclaiming, “The Deadliest Jaws? Yours. Go Vegan.” 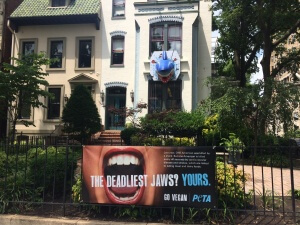 “Hyping the threat of shark attacks may raise ratings for ‘Shark Week,’ but while sharks kill an average of five humans a year globally, human beings kill 11,000 sharks every hour for fins, flesh, and fun,” says PETA President Ingrid Newkirk. “PETA’s message is that each of us can save hundreds of aquatic animals every year by choosing vegan meals.”

Fins from up to 73 million sharks per year are used for shark-fin soup. Workers drag sharks to the surface, hack off their fins, and dump them back into the ocean to die slowly from their injuries, stress, or suffocation. Other fish commonly served in restaurants and supermarkets are caught using huge commercial fishing nets, which are sometimes miles long, stretching across oceans and swallowing up everyone and everything in their paths. When hauled up from the deep, fish are often crushed to death, their eyeballs bulging out of their heads from the pressure of sudden surfacing. Others are still alive when they’re gutted.

PETA—whose motto reads, in part, that “animals are not ours to eat”—offers free vegan starter kits and encourages everyone to try healthy, humane vegan meals like Gardein’s delicious Golden Fishless Filets.