Sam Simon— co-creator of The Simpsons and renowned philanthropist—was named an honorary director of PETA.

Simon was diagnosed with terminal cancer in 2012 and has been helping PETA enormously with its animal rescue programs and youth outreach work, including funding the current nationwide college tour of a virtual reality experience called “I, Chicken,” getting 17 bears transferred from virtually barren concrete pits to a lush new home, and helping rescue several chimpanzees and a horse used for racing, among many other efforts. His support of PETA—whose motto reads, in part, that “animals are not ours to abuse in any way”—led us to name our Virginia headquarters after him in 2013, and now he joins Bill Maher, Pamela Anderson, and James Cromwell in sharing the “honorary director” distinction.

Anderson says, “I’ve been lucky enough to join forces with one of my favorite characters, Sam. We’ve been on many campaigns together. I might be able to draw some of the attention, but Sam seals the deal. Money talks, but he doesn’t just give money, he shows up—even against doctor’s orders.”

A photo of PETA President Ingrid E. Newkirk presenting Sam Simon with a certificate is available here and below. 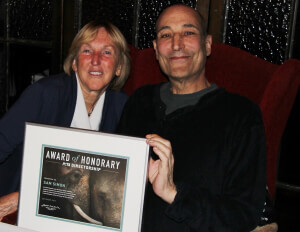