Valediction, one of the racehorses at trainer Steve Asmussen’s stables at Churchill Downs, is the son of Vindication and grandson of Seattle Slew. While bathing him one morning, PETA’s investigator saw several dozen round, white scars on his forelegs that were dime-sized and evenly spaced. They were the telltale signs of freeze firing, a painful mutilation that involves burning horses with liquid nitrogen to stimulate blood flow to an injury. She had also witnessed Valediction’s knees repeatedly being injected. Both were signs that he was likely suffering from chronic injuries.

Despite his leg problems, a few months later, Valediction was run in a claiming race (in which horses are bought, or “claimed”) at Saratoga Race Course. The horse had to be vanned off the track: He was in so much pain that he could not walk to his new owner’s barn, having suffered a bone fracture in his leg.

Hearing that Valediction had been sold, Asmussen’s longtime assistant trainer, Scott Blasi, was apparently so glad to be rid of the chronically injured horse that he said he “could do a f***ing cartwheel.” Blasi joked that Valediction was a “rat”—industry slang for a horse who doesn’t make money.

Valediction later underwent surgery to repair the injuries to his legs, but we were worried that he would be forced back onto the track and that he would likely run until he suffered a catastrophic breakdown, probably in the very next race he entered. From there, the specter of the butcher loomed.

PETA patron Sam Simon stepped right up when he heard the story and said, “Let’s get him,” and so we did. As NBCNews.com reports, because of Sam, Valediction will never suffer the fate of Nehro or Finesse, two horses our investigator cared for who died at the track.

“[W]hen I saw PETA’s video and heard about the condition of this horse, Valediction, … it was immediately clear the horse was in deep trouble,” says Sam. “He had been run on bad legs to start with and had clearly been injured during the race and had stood there shaking, unable to put weight on his feet .”

A veterinarian who examined Valediction after the purchase noted that although he is only 5 years old, he is so plagued by arthritis that he can never be used again, even as a “pleasure horse.” Valediction is now enjoying retirement at a beautiful farm in Virginia owned by other PETA supporters, and he will never be forced to run for his life again. 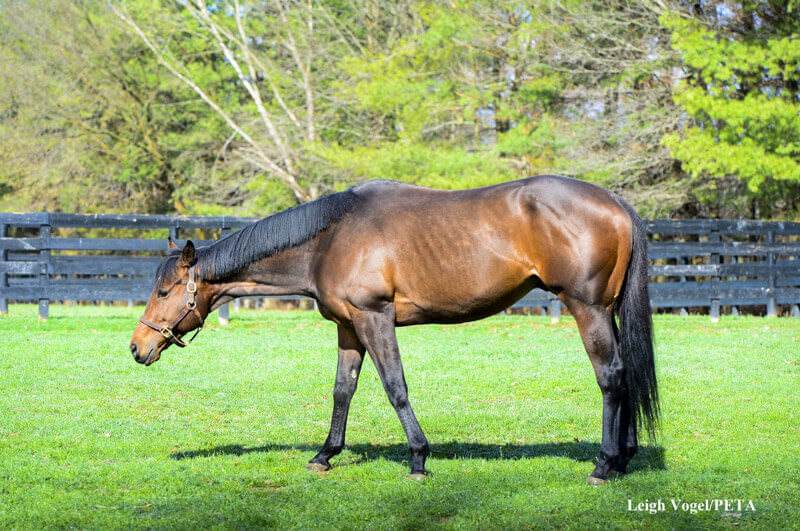 “When I see him in his blanket eating carrots, I know I helped one great horse … escape the track and live in clover until the day he dies,” says Sam.