Portland, Maine – The 45th anniversary of the dedication of Portland’s Maine Lobsterman statue is approaching, and PETA has cooked up an animal-friendly idea: Move with the times, acknowledge today’s changed understanding of the nature and sensitivity of lobsters, and replace the Lobsterman with a statue of a giant lobster crushing a trap. The group sent a letter today to Portland Mayor Kate Snyder offering its rendering of the proposed replacement statue and urging her to make the switch in recognition of the pain and torment that marine animals have suffered at the hands of the lobster industry. 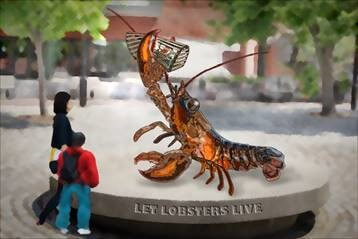 “Lobsters feel pain and fear, and since they can’t go into shock to escape pain, they suffer greatly when they’re dragged out of their watery homes to be boiled or broiled alive,” says PETA President Ingrid Newkirk. “PETA urges the mayor to greenlight a statue that would shellebrate these remarkable sea beings for who they are, not for how humans exploit them.”

I’m writing on behalf of People for the Ethical Treatment of Animals U.S.—PETA entities have more than 9 million members and supporters globally, including many who are lucky enough to live in Maine—with an offer that I hope will give you claws for celebration. Times change, and just as whaling towns have reinvented what used to be an acceptable practice, we wonder if you would care to get ahead of history by removing the “Maine Lobsterman” statue at Portland’s Old Port in recognition of the pain and torment that marine animals endure at the hands of the lobster industry. PETA U.S. would donate a poignant new animal-compassionate sculpture to put in its place, perhaps one depicting a giant lobster crushing a trap, as you can see here.

It may be inconvenient for some to recognize that lobsters are remarkable animals, but we now know they are. If you had an awkward adolescence, adult lobsters get it—they did, too. They also have an impressive long-term memory and complex social structures and can live to be about 100 years old if left in peace. Female lobsters don’t sit around waiting for a fairytail prince: They initiate a relationship with the male of their choice. These dynamic decapods can be right-handed, left-handed, or ambidextrous, and they communicate using an array of complicated signals. Gearing up for a vacation? Lobsters are, too. They take seasonal journeys, traveling more than 100 miles each year.

Regrettably, many of them won’t return home. Even though these sensitive individuals have bundles of nerve tissue throughout their bodies and their ability to feel pain is well documented, they’re trapped and killed by humans. In his essay that turned the culinary world on its head—“Consider the Lobster”—renowned writer David Foster Wallace pleaded the lobsters’ case, asking, “Is it all right to boil a sentient creature alive just for our gustatory pleasure?”

As more information on decapod pain receptivity and sentience is discovered, it’s impossible to ignore that it’s barbaric to confine these sea animals to crowded, low-oxygen tanks and boil or broil them while they’re still conscious and enduring pain. Lobsters aren’t able to go into shock, and they behave as any human would if they were plunged into scalding-hot water, desperately thrashing against the sides of a pot while attempting to clamber out.

Furthermore, fishing for lobsters contributes to whale deaths, because the lines—which cut into whales’ flesh—can impede cetaceans from diving, surfacing for air, and feeding. Nearly 80% of right whale deaths are caused by entanglement in fishing lines.

We hope you’ll be a lobstar and accept PETA’s offer to commission a new statue that truly shellabrates these remarkable animals. Thank you for your consideration. We look forward to hearing from you.