New York – Because of the coronavirus, there won’t be any protesters outside Canada Goose’s brick and mortar stores, which are currently closed—but that hasn’t stopped PETA’s international campaign against the company, which is in full swing. The group has plastered phone kiosks near Canada Goose’s SoHo flagship store with ads challenging its use of feathers from slaughtered geese and fur from coyotes caught in steel traps—and local activists are flyposting even more targeted ads to protest the brand’s cruelty to animals. 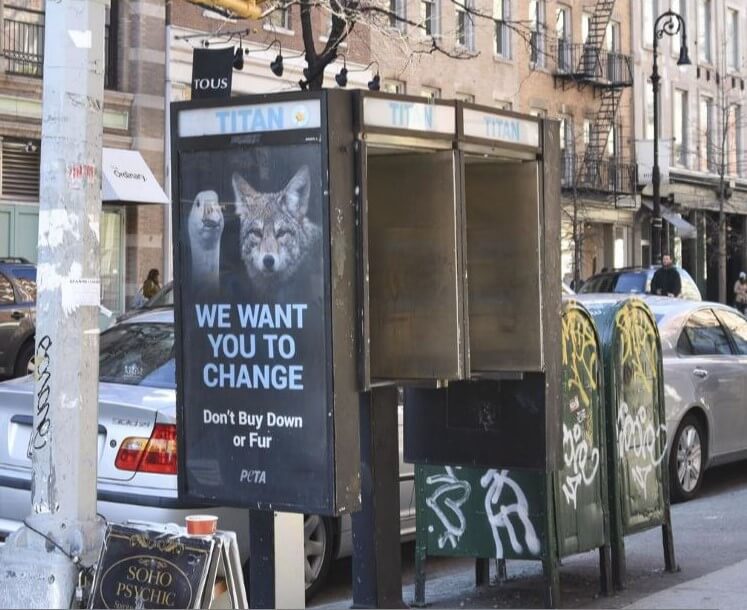 “Behind every fur-collared and down-filled Canada Goose jacket are coyotes who struggled in traps and gentle geese whose throats were slit,” says PETA Executive Vice President Tracy Reiman. “PETA wants shoppers to know that if they care about animals, the last place they should be shopping is Canada Goose.”

Trapped coyote mothers desperate to get back to their starving pups have been known to attempt to chew off their own legs in order to escape. Many trapped animals succumb to the elements, blood loss, infection, or attacks by predators before trappers return to kill them. Ducks and geese used for down are typically shipped in all weather extremes to slaughterhouses, where they’re stunned, their throats are cut, and their bodies are dunked into scalding-hot defeathering tanks.

Following a PETA complaint and a subsequent Federal Trade Commission investigation, Canada Goose stopped claiming that its standards ensure that its suppliers don’t abuse animals. In February, Forbes reported, “Canada Goose shares fell 42% in the past year as investors grew increasingly concerned about slowing growth, inventory levels, and the backlash it has faced over its use of coyote fur.”

A wide variety of top brands—including Hemp Tailor, Save the Duck, NOIZE, and Wuxly Movement—sell warm, stylish, humane coats that no animal had to suffer and die for.

PETA—whose motto reads, in part, that “animals are not ours to wear”—opposes speciesism, which is a human-supremacist worldview. For more information, please visit PETA.org.