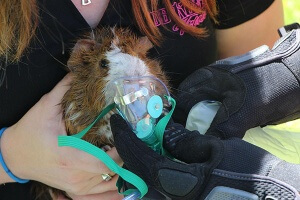 “Whether it’s people or animals, we do our best to protect them,” Polk County Fire Rescue Public Information Officer Kevin Watler told PETA. According to a Facebook post by Rodney’s guardian, he’s now “[b]ack to his spoiled little self.”

To thank the firefighters for their efforts, PETA is sending a framed certificate along with a box of delicious vegan cookies and a copy of The Engine 2 Diet—a Texas firefighter’s 28-day plan to stay in top shape by eating plant-based meals.

“The kind, quick actions of these brave firefighters saved this guinea pig from a painful, terrifying death,” says PETA Senior Director Colleen O’Brien. “PETA urges everyone to follow their example and always be a hero for animals in need.”

PETA—whose motto reads, in part, that “animals are not ours to abuse in any way”—encourages all animal guardians to put a sign on doors or windows to alert rescue workers to the presence of companion animals. Families can order stickers from the PETA Catalog or make their own.