Please see the following statement from PETA Executive Vice President Tracy Reiman—pictured below being arrested while protesting outside the National Aquarium in the 1990s, with more protesters outside of the aquarium pictured underneath—about the aquarium’s announcement this morning that it is sending the dolphins confined to its tanks to a seaside sanctuary:

After more than 20 years of protests against the cruelty of captivity, PETA today applauds the National Aquarium for making the decision to let the dolphins—including one who was born at SeaWorld Orlando—out of its tanks and put them back into the ocean where they belong. The National Aquarium’s welcome move recognizes that the needs of intelligent, sensitive, far-ranging dolphins simply can’t be met in captivity. This spells the beginning of the end for dolphin captivity and the start of an age in which SeaWorld, the Miami Seaquarium, and other marine parks reject excuses not to retire long-suffering captive dolphins—including orcas—to sanctuaries. 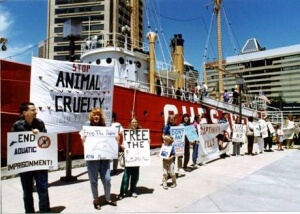 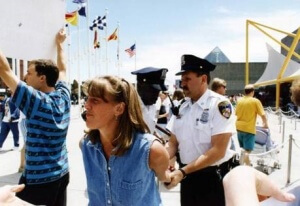 PETA’s motto reads, in part, that “animals are not ours to use for entertainment,” and more information about our campaign against SeaWorld is available at SeaWorldOfHurt.com.