Honolulu – PETA is going to the mat for the homeless animals flooding Hawaii’s animal shelters by placing an irresistible message—“Your Yoga Partner Is Waiting in an Animal Shelter”—in hundreds of buses throughout the capital city, urging anyone who’s considering adding an animal to the family to adopt and never buy from breeders or pet stores. 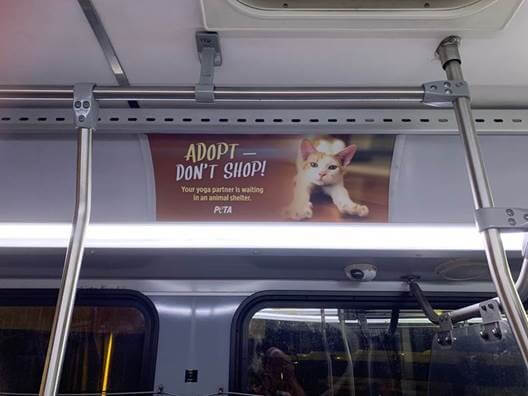 “Whether you’re looking to practice cat pose or downward-facing dog, shelters are filled with animals who would love to be your workout buddy,” says PETA Senior Vice President Daphna Nachminovitch. “PETA is encouraging anyone with the ability and resources to care for an animal to steer clear of breeders and say ‘Namaste’ to a dog or cat from a local shelter.”

Around 70 million dogs and cats are homeless in the U.S. at any given time. Many of those who are lucky enough to end up in an animal shelter, rather than being abandoned on the street to fend for themselves, must be euthanized for lack of good homes. That’s why PETA urges guardians to have their animal companions spayed or neutered and advocates for adoption: Despite the homeless-animal crisis, only 23% of dogs and 31% of cats are adopted from animal shelters or adoption facilities.