Ahead of 'Shark Week,' PETA Billboard Alerts People to the Most Dangerous Mouths in the Water: Their Own

New Bedford, Mass. – With the fearmongering TV event Shark Week just around the corner, PETA has placed a billboard near the ferry to Martha’s Vineyard, where the movie Jaws was filmed, that gives people food for thought about who is really the biggest threat to lives. 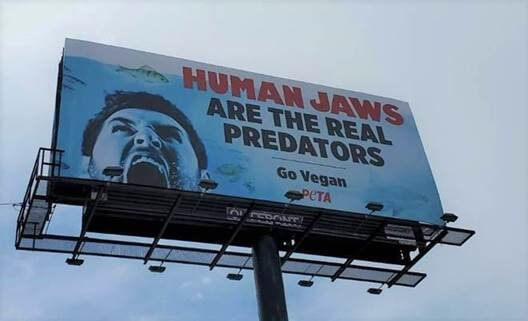 “The most dangerous predators in the water aren’t sharks—they’re the humans who catch, kill, and consume trillions of marine animals every year,” says PETA Executive Vice President Tracy Reiman. “PETA’s billboard urges people to make the oceans a little safer for all living beings by leaving animals in peace—and in one piece—and going vegan.”

PETA—whose motto reads, in part, that “animals are not ours to eat”—points out that numerous studies have confirmed that fish have unique personalities, can recognize human faces, and can retain memories and think ahead. But because of human prejudice—and even though more fish are killed for food each year than all other animals combined—they have virtually no legal protection from abuse. They slowly suffocate or are crushed to death when they’re dragged out of the ocean in huge nets, and the throats and abdomens of those who survive are cut open on the decks of fishing boats.

The ad is located at 622 Acushnet Ave. in New Bedford, just a mile from the ferry to Martha’s Vineyard.