Wilmington, Del. – Around the corner from local breakfast spot Libby’s Restaurant, PETA is placing a sky-high plea encouraging everyone to recognize pigs as thinking, feeling individuals and keep their plates clear of scrapple—a congealed gray loaf often made with main-cut castoffs like snouts, tails, and other fleshy parts of pigs. The group will also place the “Go Vegan” message at a bus shelter downtown. 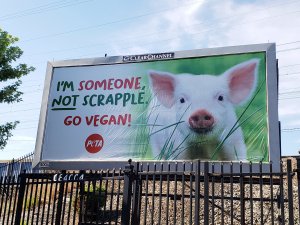 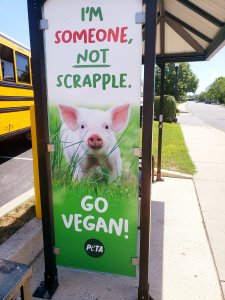 “Every time someone chooses oatmeal, fruit salad, vegan sausage, or tofu scramble instead of scrapple and other pig parts, they keep a gentle, playful pig from feeling pain,” says PETA President Ingrid Newkirk. “PETA encourages Delawareans to enjoy foods that save lives—perhaps, given the fat and cholesterol in meat, even their own!”

Nearly all of the 121 million pigs in the U.S. killed for food each year—including for scrapple—are confined to filthy enclosures so small that they can barely turn around. Workers chop off piglets’ tails, cut their teeth with pliers, and castrate the males—all without pain relief. At the slaughterhouse, workers hang pigs upside down, sometimes while they’re still conscious, and bleed them to death. By going vegan, each person can save nearly 200 animals every year; reduce their risk of suffering from cancer, heart disease, strokes, diabetes, and obesity; and dramatically shrink their carbon footprint.

PETA’s billboard is located at 202 M.L.K. Jr. Blvd. and the bus shelter at the intersection of N. Orange and W. Fifth streets.

PETA—whose motto reads, in part, that “animals are not ours to eat” and which opposes speciesism, a human-supremacist worldview—notes that many pig-friendly options are available today, such as Sweet Earth’s Benevolent Bacon, Tofurky’s Ham Style Roast, and Gardein’s Breakfast Saus’ge. For more information, please visit PETA.org or follow the group on Twitter, Facebook, or Instagram.