Philadelphia – Skyjacking the contest over whether Pat’s King of Steaks or Geno’s Steaks serves a superior cheesesteak, PETA is serving some food for thought near the restaurants with a towering warning that cheesesteak kills, both by ending a cow’s life and by contributing to heart disease in humans who eat the high-fat, high-cholesterol sandwich. Heart disease is the leading cause of death in Pennsylvania and across the country. 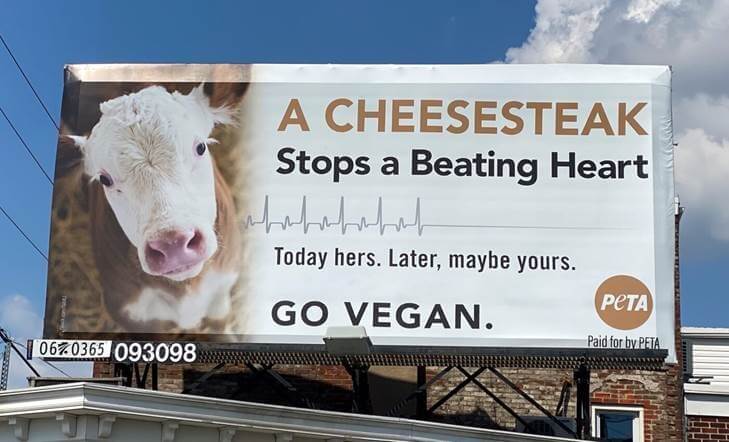 “It makes no difference who sells the cheesesteak when, instead, you can pick something that doesn’t clog your arteries or involve killing cows,” says PETA President Ingrid Newkirk. “PETA is encouraging Philly diners to show some brotherly love to animals and vote for health by opting for a delicious vegan cheesesteak instead.”

Vegan options abound in Philadelphia, including the vegan cheesesteaks at HipCityVeg, Monster Vegan, The Tasty, and Triangle Tavern (just a block away from Pat’s and Gino’s—and a few feet from PETA’s billboard).

The consumption of meat and dairy products is linked to heart disease as well as diabetes, obesity, strokes, and various types of cancer—including colon and breast cancer. It’s also responsible for immense animal suffering: Factory-farmed cows used for beef are confined to cramped, filthy feedlots without protection from the elements, while those in the dairy industry are artificially inseminated—workers insert an arm into the animals’ rectum and a metal rod to deliver semen into their vagina—and then sent to slaughter when their bodies give out. At the slaughterhouse, workers shoot cows in the head with a captive-bolt gun, hang them up by one leg, and cut their throats—often while they’re still conscious. A vegan spares nearly 200 animals’ lives each year.