Abbotsford, B.C. – PETA believes factory farmers, not those who show the world what’s going on inside their wretched facilities, should be in court, yet that’s not the case when it comes to two activists who face sentencing after prosecution for live-streaming the volleyball-size hernias and illness afflicting pigs on Excelsior Hog Farm, so PETA is launching local, can’t-be-missed appeals urging everyone to vote with their food budget by leaving animals off their plates.

Featuring an image of a mother pig the activists found crammed inside a metal crate, an urgent message in tomorrow’s edition of the Vancouver Sun will slam law enforcement for prosecuting the whistleblowers rather than the animal abusers. And on Highway 91, PETA has just placed a sky-high vegan plea that includes an image of a piglet cradled in someone’s arms—not in a dirty pen or left to rot, as the local activists found was the case for animals on the farm. 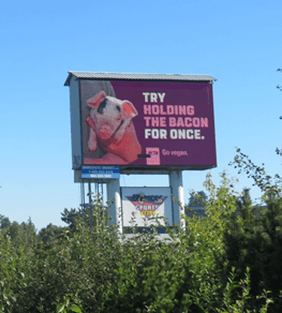 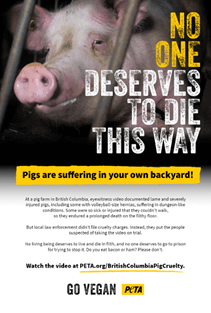 “These wonderful people risked their own freedom to show consumers piles of dead pigs, blood and filth everywhere, and piglets unable to reach their mothers,” says PETA President Ingrid Newkirk. “PETA is calling on everyone to reject cruelty to animals by simply choosing healthy vegan meals.”

Sows at Excelsior Hog Farm—which is owned in part by Ray Binnendyk, a member of the board of directors of the BC Pork Producers Association—were forced to give birth in farrowing crates hardly bigger than their bodies, and they could nurse but not otherwise tend to their babies for the first weeks of their lives, causing many to die unattended. Sentencing for the activists who documented this abuse is scheduled for August 26.

On other farms, animals fare no better: Pigs’ tails are chopped off, their teeth are cut with pliers, and males are castrated—all often without pain relief. At the slaughterhouse, they’re hung upside down and bled to death. Each person who goes vegan saves the lives of nearly 200 animals every year.

PETA’s billboard is located along the Alex Fraser Bridge on Highway 91, just south of the interchange with Highway 17.

PETA—whose motto reads, in part, that “animals are not ours to eat”—opposes speciesism, a human-supremacist worldview. For more information on PETA’s investigative newsgathering and reporting, please visit PETA.org or follow the group on Twitter, Facebook, or Instagram.