Norfolk, Va. – Festivalgoers and diners at fast-food chicken restaurants may think twice about chomping on chicken wings after they see—and hear—PETA’s realistic “Hell on Wheels” truck, which has just kicked off a national tour and is covered with images of “broilers” crammed into crates on their way to slaughter, complete with a recording of birds’ actual cries and a subliminal message every 10 seconds suggesting that people go vegan.

The tour began outside the Taste of Buffalo festival in upstate New York, and upcoming stops include the Nashville Hot Chicken Music Festival and the Memphis Chicken & Beer Festival in Tennessee, and fried chicken restaurants in St. Louis, Chicago, Pittsburgh, Philadelphia and Baltimore, among dozens of others. As PETA’s video footage shows, the display is already shocking passersby—one child told the driver that the chickens looked “like they’re being mistreated.” 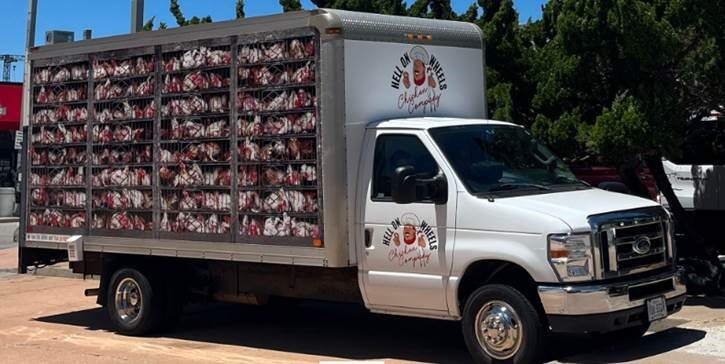 “Americans eat 1 million chickens an hour, and each one has as much desire to live, feels as much fear and pain, and is as much an individual as the dogs or cats people have in their homes,” says PETA Executive Vice President Tracy Reiman. “‘Hell on Wheels’ confronts people with the horrific suffering endured by birds who end up as their chicken sandwiches and Buffalo wings, reminding them that the kindest meal is a vegan one.”

Birds killed for their flesh are bred to grow such unnaturally large upper bodies that their legs often become crippled under the weight, and the sheds in which they’re confined are so filthy that the red, watery goo in packages of chicken is referred to as “fecal soup.” They’re trucked through all weather extremes, sometimes over hundreds of miles and without any food or water, to slaughterhouses, where their throats are slit—often while they’re still conscious.