New York – When Starbucks opens its new “grab and go” café in the lobby of The New York Times Building tomorrow, PETA will be on hand to cause a ruckus with a lifelike calf stuffed into a “bloody” Starbucks cup. The new café is directly across the street from Sir Paul McCartney’s PETA billboard calling on the chain to stop charging customers extra for vegan milks, which prevent calves from being torn away from their mothers soon after birth in the dairy industry and—as Starbucks admits—are better for the planet. 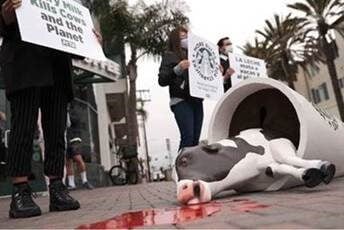 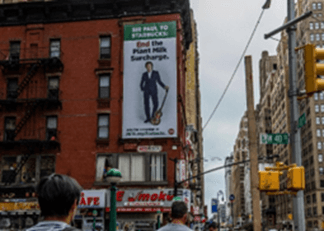 “Starbucks’ vegan milk upcharge leaves a bad taste in the mouth of anyone who cares about animals or the environment,” says PETA Executive Vice President Tracy Reiman. “PETA is calling on Starbucks to stop curdling customers’ goodwill by charging extra for kind and climate-friendly choices.”