Cincinnati – A Proggy Award (“Proggy” is for “progress”) is on its way from PETA to Planet Digital Partners in honor of its upcoming Cooking Mama: Cookstar game, which will include a “vegetarian mode” featuring 90 different meat-free recipes. 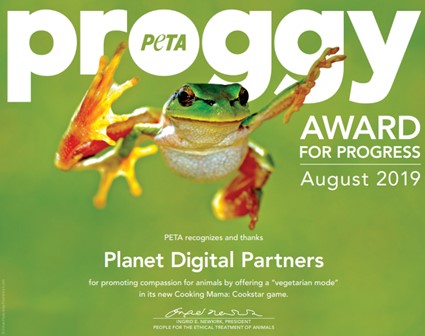 “Cooking Mama‘s ‘vegetarian mode’ is sure to be a hit with the huge population of gamers who are committed to choosing kindness over cruelty,” says PETA Executive Vice President Tracy Reiman. “PETA is honoring Planet Digital Partners for showing other game publishers how to create great games that align with players’ values.”

In the real world, chickens’ and turkeys’ throats are often cut while they’re still conscious, piglets’ tails and testicles are cut off without any pain relief, and fish are cut open on the decks of fishing boats. According to a recent study, 70% of the world’s population is reducing or eliminating its meat consumption. Each person who goes vegan saves the lives of nearly 200 animals every year—and the United Nations reports that a global switch to vegan eating is vital if we are to combat the worst effects of climate change.