Rock Hall, Md. – Compassionate Action Awards are on their way from PETA to Dennis Jay and Peter Lamb, who rescued a young raccoon from the waters of the Chesapeake Bay on the morning of July 4. The men and their families were reportedly celebrating the holiday on Jay’s boat when they spotted the raccoon, who seemed worn out from treading water for a long period of time. Jay remarked that he likely ended up in the water as the result of being spooked by the fireworks from the night before. The group lowered a life jacket to the struggling raccoon and—as shown in Jay’s video of the rescue—Lamb used a dinghy to tow him back to shore. “There’s no way we [could] just leave him. He was obviously struggling … he was clawing at the boat,” Jay told PETA. 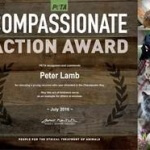 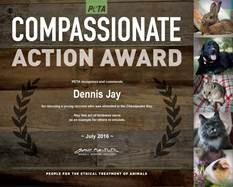 “This raccoon’s frightening ordeal had a happy ending, thanks to kind people who were ready and willing to get this little animal to safety,” says PETA Vice President Colleen O’Brien. “PETA hopes their kindness will inspire others to take action to help animals in need.”

PETA—whose motto reads, in part, that “animals are not ours to abuse in any way”—offers tips for helping wildlife on its website.

Jay and Lamb will each receive a framed certificate and a box of delicious vegan cookies.