Vegan Shoes Take Over the World? 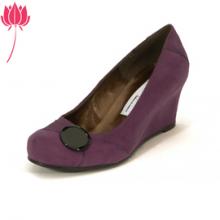 Some of you might remember that last summer, I blogged about the top 10 places to find vegan women’s shoes. Well, proving once again that when it comes to fashion—as with most things—vegans are ahead of the curve, the Wall Street Journal recently ran an article all about fashionable vegan footwear!

The authors of the article gave the thumbs up to cruelty-free pumps, boots, and flats by Olsenhaus, Neuaura, Stella McCartney, and Toms, schooling the Wall Street Journal’s more than 2 million readers in the virtues of vegan fashion. (Yes, I said 2 million—it is the second largest paper in the country, after all!)

No doubt, we’ll be hearing more buzz about vegan footwear (and cruelty-free fashion in general) as savvy shoppers seek out “green” additions to their wardrobe. Vegan products are pretty much synonymous with eco-chic—environmentally friendly style that is taking fashion magazines and runways by storm.

Unlike leather products, vegan shoes, belts, and bags don’t require harmful chemicals to keep them from, um, decomposing. Leather is also an environmental no-no because tanneries pollute groundwater and streams and because raising animals for their flesh and skin wastes massive amounts of resources—not to mention that it sentences animals to cruel deaths!

Are you still scuffing around in the skins of dead animals? Maybe it’s time to get in step with fashion—and compassion—and treat your feet to a pair of pleather shoes!