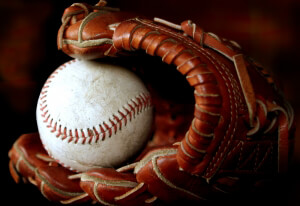 The baseball glove can be traced back to the 1860s, when players were looking for a way to protect their hands from injury. Doug Allison, a catcher for the Cincinnati Red Stockings, was one of the first players to wear a buckskin mitt in 1870, and five years later, Charles Waite of St. Louis was the first confirmed player to wear a baseball glove.

In 2010—nearly 140 years later—manufacturers sold 5.1 million baseball (and softball) gloves, earning $208.7 million, according to a report by the National Sporting Goods Association.

It’s no secret that the glove-manufacturing business is a lucrative one. Yet money isn’t the reason artisan Scott Carpenter joined the business. Carpenter is the owner of Carpenter Trade LLC, a company that crafts custom-fit baseball gloves. Two of his glove styles have made it into the Baseball Hall of Fame’s permanent collection for their artistry. And both are made out of six different types of microfiber—that means no leather.

Carpenter isn’t the only one to cut leather out of the equation: Gopher Impact Zone sells all-synthetic gloves ($26), as does Rawlings ($25). But he prefers to make leather-free, custom-fitted gloves by taking measurements or a mold of the hand of the person who will sport the glove. Currently, star players seldom wear custom-fitted gloves, but Carpenter wants to change that. 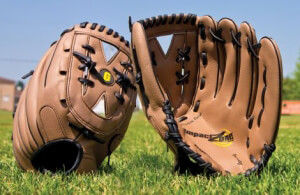 MarketWatch reported that in Carpenter’s view, the leather itself has been an obstacle between the players and better performance. With previous experience in making shoes from synthetic material, he thought such material could improve on leather because it’s stronger, lighter, and more breathable—attributes that are valued in a sports glove.

It may not sound like a big step for a glovemaker such as Carpenter to cut out cow- or calfskin, but overall, materials and technology haven’t changed much since “Heart of the Hide”—Rawlings’ famous leather glove model that came out in the 1950s. Nike and Mizuno have yet to create an all-synthetic glove, and most manufacturers still use leather materials.

Want a Carpenter-made glove for your collection? Gloves go for a hefty $560 (or more) on eBay, with only 50 made each year. He estimates that 50 gloves will be available to the general public next year, too—the rest will be made for professional players.

We hope more manufacturers will realize that by using animal-derived materials such as leather—which is mainly used out of tradition, not for quality—they’re supporting a cruel industry and that they’ll make the compassionate decision to use synthetic materials instead.