Win a Gift Bag Fit for the Stars! 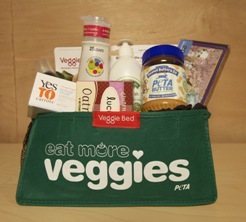 As you probably know, we recently celebrated 30 years of groundbreaking work for animals and honored activists and celebrities for their dedication to PETA’s mission. Not everyone could make it out to Los Angeles for the celebration, though some of us were lucky enough to be tweeting live from the red carpet. Someone had to tweet photos of Kellan Lutz, right? So instead, I hope you joined in on the festivities by catching our live streaming event on Facebook—or maybe you watched footage from the event again and again (hoping to see more Kellan) here.

In any case, there is one thing that you couldn’t get unless you attended the gala—or couldn’t get until now! The G-I-F-T-B-A-G! That’s right, I’ve nabbed a gift bag fit for the stars, and now you have a chance to win it!

What is in said gift bag, you ask? Let me break it down for you. The winner of the gift bag will receive the following:

That’s a whole lotta loot, no?

Tell me about a gift that you have given to an animal in the comments section below and then fill out the form here. Your gift could be choosing not to eat animals’ babies, giving an adopted animal a forever home, or making a donation. Submit your entry by October 28, 2010. One winner will be chosen at random and notified on November 1, 2010.

This contest has ended.