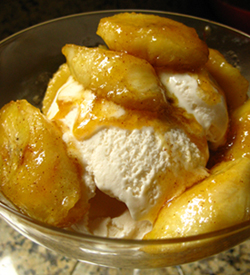 Adding healthy ingredients to almost any dessert somehow makes it feel slightly less sinful and indulgent. I’m not saying it’s OK to eat an entire vegan cheesecake if the crust contains a few flaxseeds thrown into the mix, but I would feel slightly less guilty about having a piece—or two.

With this recipe for Warm Cinnamon Bananas Over Soy Ice Cream, I feel like a regular health nut because it calls for five whole bananas—never mind the sugar and the margarine and the ice cream and the sherry.

The combination of the cold ice cream covered with warm glazed bananas leaves you with a simple yet yummy dessert. It was just a little on the sweet side for me, so consider reducing the amount of brown sugar if you also suspect that the bananas and ice cream might be enough to please your sweet tooth. Enjoy.

•Heat the margarine in a large, flat-bottomed pan.

•Add the sliced bananas and the sugar and cook for 1 to 2 minutes to heat through.

•Quickly add the lemon juice, sherry (if using), and cinnamon.