Vegetarians Get More Bang for the Buck 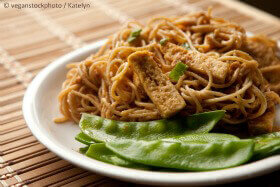 Two recent studies prove what most of us vegetarians already knew: vegetarian diets are cheaper and more nutritious than meat-based ones.

Two Oklahoma State University professors studying costs and benefits of vegetarian diets found that vegetarian foods cost less to both produce and consume than animal products. For example, the researchers determined that obtaining a gram of protein from the cheapest meat source studied (chicken flesh) costs more than triple the price of obtaining a gram of protein from the most expensive plant-based source studied (peanuts).

And it’s only going to get costlier for carnivores. Cattle futures economists predict that beef prices will skyrocket to record highs in 2012. The U.S. Department of Agriculture concludes that the price of beef will rise more than any other major food group. Meatpackers, retailers, and restaurants all face higher costs, which—you guessed it—get passed on to the consumer.

Another study published in Food, Nutrition & Science and The Journal of the American Dietetic Association compared nutrient intakes of vegetarians and nonvegetarians. Researchers found that the vegetarian group had higher intakes of nutrients, including fiber, thiamin, riboflavin, folate, calcium, magnesium, iron, and vitamins A, C, and E, and that vegetarian diets in general were very healthy. The American Dietetic Association reports that vegetarians are less prone to heart disease, cancer, diabetes, and obesity than meat-eaters are. So not only do vegetarians save animal’s lives, but they save at the register, and at the doctor’s office too. We’ll eat to that.