Cozy Up to These Vegan Tea Latte Ideas

These vegan tea lattes are the perfect drink, whether you’re looking for a morning blend to wake you up or a soothing herbal mixture to enjoy before bed. They can have slightly less caffeine than coffee or none at all, so you won’t get that jittery feeling throughout the day (or night). Plus, they’re delicious and simple to make in your own kitchen, so you don’t have to pay an extra charge for your vegan milk of choice. (See ya, Starbucks.) These tea-and-milk combinations can be made with your favorite vegan milk and bee-free sweetener, and they can be served warm or over ice. We’ve also added a couple of on-the-go vegan tea lattes for when you’re running low on time but need a treat.

For a quick pick-me-up, RISE Brewing Co. makes a delicious canned Earl Grey tea latte. The nitro brewing method brings out the aromatic bergamot orange flavor, which goes great with the smoothness of oat milk. It’s a great way to relax on a warm summer day.

This creamy matcha latte is naturally sweetened with dates and gets an extra nutrient boost from spirulina.

In addition to being organic, Stash’s Chocolate Orange tea tastes good enough to be called a dessert tea. The light creaminess of almond milk pairs perfectly with the chocolate flavor, while the subtly tangy sweetness of agave syrup highlights the zing of natural orange. To make this delectable vegan tea latte, simply boil water, pour it into your favorite mug, and steep the tea bag for about 4 minutes. Once you’ve removed the bag, add about a teaspoon of agave and enough almond milk to cool the drink to your liking. Serve this tea latte to guests with fresh orange slices and vegan dark chocolate on the side—or sip it alone as a calming evening treat. 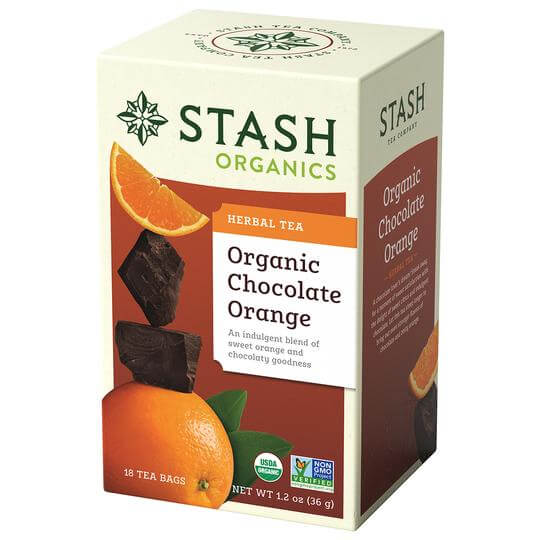 Tazo’s organic chai tea combines spices such as cinnamon and cardamom to create a warm and exotic blend that’s ideal for cold weather. While chai has its own natural sweetness, thanks to the cinnamon, pure maple syrup’s earthy flavor perfectly complements this aromatic brew. The addition of creamy coconut milk completes the tea latte, not only cooling it to a comfortable temperature but also contributing a fittingly exotic element. No matter where you choose to drink your chai latte, you’ll swear you’re in India after just one sip.

For a lighter tea latte that’s as refreshing as it is comforting, brew a cup of Numi’s Moroccan Mint tea. If you’re already a fan of mint tea, you’ll fall in love with its authentic flavor—which is reminiscent of fresh garden mint rather than toothpaste. Steep a bag in boiling water for up to 5 minutes, then add just a pinch of stevia for a hint of sweetness and a splash of soy milk to cool down your new favorite beverage. You’ll find that this blend is equally enjoyable as a morning pick-me-up or calming evening relaxer.

What natural health remedies do you love? Pro tip: herbal mint tea is known to help calm an upset stomach.

Why do people go vegan? Because it’s the best way to help animals, save the planet, and improve our own health.