A Vegan Diet Helped This Man Lose More Than 100 Pounds!

Before his transformation, Eric O’Grey weighed in at 280 pounds and had a 50-inch waist. He was 51 at the time, and his doctor told him that unless he made immediate changes, he would probably live less than five years because of his poor health, which included type 2 diabetes, high blood pressure, and high cholesterol. His medications cost more than $1,000 per month. 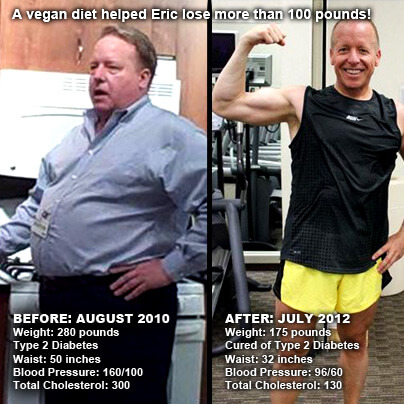 Eric decided to take action when he saw President Clinton interviewed on CNN and talking about The China Study and the healing power of a plant-based diet. He bought the book and hired a nutritionist who told him that he could cure all his medical problems by going vegan and avoiding processed sugar. She taught him how to eat and cook using organic whole foods. At the time, he’d never had a meatless meal, and most of his meals were ordered through his car window or delivered to his home. However, going a vegan was easy for Eric, who says he adjusted comfortably in just a few short months. He was most surprised when he learned that being vegan didn’t mean just eating salads—he could eat satisfying comfort foods, including rice, potatoes, pasta, lasagna, and other favorite foods such as Chinese stir-fry and Mexican cuisine.

In addition to switching to a plant-based diet centered on whole foods, he started to exercise. At first, he was unable to tie his shoes without being out of breath. Then, by walking every day with his adopted dog, Peety, his stamina began to improve. Now, in 2012, he is running an average of 40 miles each week and plans to run five full marathons and between 15 and 20 half-marathons this year!

While his physical transformation is certainly admirable, equally important are the other changes that he’s experienced. Eric says that is energy is through the roof, even though he sleeps about half as much as he did before. He describes the difference in his mental clarity, saying, “It feels like I am awake for the first time in my life.” Plus, he feels great knowing that his food choices are helping not only his own health but also the environment and, of course, animals. But no matter what makes you decide to go vegan, its positive impact is destined to ripple outward.

“It is my greatest wish that others will achieve the happiness I’ve achieved, which is possible just by making this one dietary change in their lives,” says Eric. But you don’t have to be a marathoner to see great results. Many will see a drastic improvement just by switching to a vegan diet and walking for a half-hour several times each week! And this is why he joined the PETA Pack, because it combines everything he enjoys: healthy plant-based nutrition, running, and a love for animals.