Think There’s Such a Thing as ‘Humane’ Meat? Read This Book.

Peruse the meat case at any supermarket, and you’ll see numerous brightly colored stickers reassuring consumers that the animals killed and packaged for their containers came from a farm that was “sustainable,” “small-scale,” “organic,” “free-range,” and even “humane.” Some labels even proclaim that the animals were raised “according to the highest animal-welfare standards.” These labels are a response to the now-mainstream movement against the factory farming of animals for food, which arose from people’s disgust with the intensive confinement, deprivation, and mutilation that animals endure on factory farms, followed by what is often a prolonged and painful slaughter. 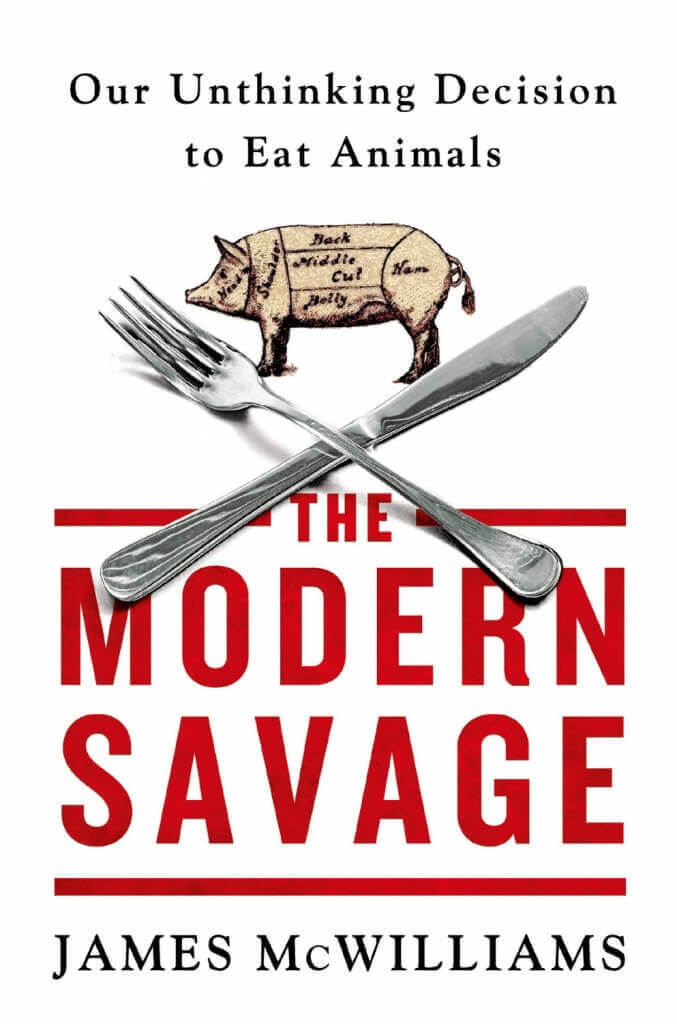 But when author and Texas State University history professor James McWilliams looked closer at the claims of “humane” meat and the farms that supply it, he found that behind the “agrarian myth, bucolic marketing, media hype, and self-interested rationalizations” is more torment and abuse of animals. In his new book, The Modern Savage: Our Unthinking Decision to Eat Animals, McWilliams makes the scientific case for animals’ sentience and emotional lives and exposes the pervasive cruelty even on so-called “humane” farms. He examines the hypocrisy of claiming to care about animal welfare while still “supporting the very products that allow agribusiness not only to stay in business, but to thrive.” And he convincingly presents the only real solution to the problem of industrial animal agriculture: We must stop eating animals.

Even in a non-industrial setting, many people share the same view of animals: They are commodities to be processed and turned into profit. McWilliams talks about a dairy farmer who names each of his cows—and then promptly slaughters them when their milk production drops. A pig has each of her babies wrenched away and sold, “squealing and shrieking.” Chickens are heavily medicated, are denied veterinary care, and die of disease, exposure to extreme weather, and injuries sustained in attacks by other animals. Farmers of grass-fed cattle tear calves away from their mothers and sell them to industrial farms for “cash flow.” Pigs still have septum rings shoved into their snouts to stop them from rooting and are castrated without painkillers.

The notion of so-called “humane” farming contains an inescapable omission: The animal’s death is never mentioned. It’s what McWilliams calls a clever “sleight of hand” trick that allows “humane meat” purveyors to convince consumers that because an animal supposedly had a better quality of life, his or her death is somehow immaterial. As McWilliams writes, “We owe animals, not to mention humans, a better explanation than ‘death is only one day.’ Death is a serious business that, for farm animals, denies them a future they’d otherwise have had.”

Most “humanely raised” animals are killed in the same slaughterhouses used by factory farms. They are hung upside down, and their throats are slit open. Many are still alive as they are hastened down the slaughter line to be scalded, skinned, plucked, or hacked apart. Says a farmer of a “kind,” “gentle” pig, “I will never forget the way she looked back at me as she walked through the slaughter chute.” A goat farmer concludes, “To watch a sentient being gasp for air and to look into his eyes filled with fear and to see the blood coming from his neck―it’s the most heart-wrenching, awful thing.” A self-proclaimed “humane” farmer admits that “out of the corner of your eye, in the blurry periphery of your vision, something dark, and something evil lurks: It is the truth: meat is indeed murder.”

People are outraged by industrial animal agriculture, as well they should be. But the appropriate response isn’t the rhetoric of “humanely” raising and killing animals for food. In McWilliams’ words:

“If we want to end the industrial production of food as we know it, we can do one thing, right now, without hesitation: we can stop eating animals raised as food. … Because what we’ve tried so far isn’t working.”