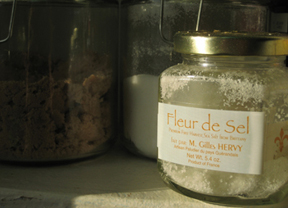 I recently read in What Einstein Told His Cook: Kitchen Science Explained that salt is just, well, salt. All salt is made of sodium chloride, so no matter what part of the world it comes from, or how much you paid for it, at its core, it is the same as the plain old table salt you can buy for 50 cents at your local market.

This may bring you back to that childhood moment when you realized that the “weird” cereal in the bag was exactly the same as the stuff in the colorful box that contains a free toy. The world no longer makes sense, and you wonder, “How could I have been fooled? How does one taste so much better than the other if they’re the same? And why would anyone buy the more expensive stuff?” As a child, you probably just said, “Give me more cereal,” but stick with me here.

The answer is simple as to why we pay more for something that we know is basically the same as its cheaper, albeit less fancy, cousin—you’re buying the complete package, the full experience, not just the main ingredient. With salt, it’s not just sodium chloride that affects the taste but also the size and shape of each grain, along with the additives that are native to the salt’s region of origin.

So yes, salt is salt, but varieties vary in taste because of factors beyond their main ingredient. Large grains take longer to dissolve and therefore result in a saltier taste. Flakes interact with a larger surface area of your tongue, so they, too, create a saltier taste. Additives ranging from magnesium and potassium to smoke and volcanic clay all have an impact on the taste of the finished product.

Here is a quick review of a few of the most common types of salt used today:

There are hundreds of varieties out there. From Peruvian pink to Cyprus black and from Danish Viking-smoked to Japanese nazuna, the varieties are seemingly endless.

Get crazy with it, and take a step back to that childhood impracticality when you had to have the cereal that came in the colorful box with the “free” prize. The subtle differences in the world of salt are definitely worth the taste.